Home Winner Auschwitz. Not long ago. Not far away.

Auschwitz. Not long ago. Not far away.

The attempt by the government of Nazi Germany to destroy Europe’s ethnic and religious diversity resulted in the murder or forced displacement of millions of people who were targeted because of their ethnicity, religion, political beliefs, or sexual orientation. This trauma is still part of the living memory of many of Europe’s and the world’s citizens. However, a lack of knowledge and indeed denial of the Holocaust is increasingly common against the backdrop of an alarming rise in nationalism, xenophobia, antisemitism, racism and hatred. Thanks to this exhibition, it is expected that more than 7 million visitors will learn about the complicated history of the largest German Nazi concentration and extermination camp – Auschwitz-Birkenau – as well as how and why the Holocaust happened. As new witnesses to the atrocities, they contribute to keeping the memory of the victims alive and gain an understanding of why intolerance must always be challenged.

When choosing Auschwitz. Not long ago. Not far away. to receive this year’s Grand Prix in the category Education, Training and Awareness-Raising, the Board of Europa Nostra noted: “Europe is facing an alarming and unacceptable rise in nationalism, xenophobia, antisemitism, racism and hate speech. Exhibitions such as Auschwitz. Not long ago. Not far away. – based on rigorous research and European collaboration – are important in that they raise awareness and make the lessons from our shared past more tangible, offering factual and clear evidence of what can happen when various forms of extremism are tolerated”.

The exhibition provides those who cannot visit the Auschwitz Memorial with insight into the site’s story and the fate of its prisoners and victims. A chronological narrative is illustrated by more than 700 original pieces, many of them shown to the public for the first time.

The exhibition first took place in Madrid and welcomed over 600,000 visitors including 100,000 schoolchildren. It is currently in New York and will continue its tour to a number of other cities, with the content adapted to include local stories in each locality. Education is a key core value of the project. Free admission was established for school visits, together with an educational and cultural program that included lectures, tribute concerts, debates and other events. Audio guides are available in eight international languages. 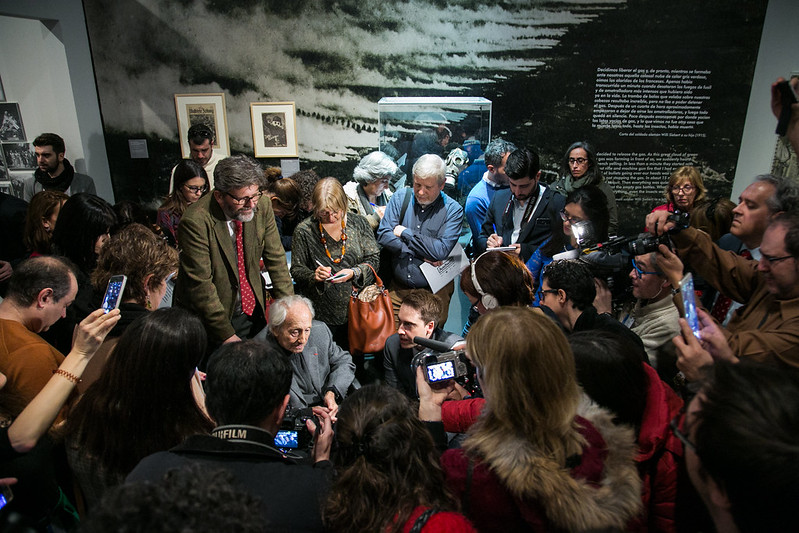 The exhibition is the result of the collaboration of two European entities, Musealia from Spain and the Auschwitz-Birkenau State Museum in Poland. It has been supported and provided with artefacts by more than 20 museums and institutions, including The Weiner Holocaust Library in London, Hartheim Castle Education and Memorial Centre in Austria, the Sachsenhausen Memorial in Germany and the Anne Frank House in The Netherlands. A part of the revenues created by the exhibition will contribute to the general preservation of all authentic remains of Auschwitz for future generations.

“This awareness-raising and educational project preserves the memory of one of the worst episodes in the history of humanity and is based on deep, scientific, historical research. The topic is communicated in a direct and accessible way for different audiences without lessening its importance and has already reached an impressive number of visitors. The exhibition is supported by social media dissemination of the contents in order to approach a young audience and to maintain the remembrance of the victims of Auschwitz. A strong network of institutions was engaged in the project and it is an example of good practice for partnerships between non-profit and for-profit organisations. The exhibition opens up the platform for increasing the knowledge, collection and interpretation of the documentation. Its display succeeded in recreating the emotional experience of visiting the real site, which is challenging for a travelling exhibition and is thanks in part to the richness of the content”, the Jury stated.