Home Winner Epitaphs of the University Church of Leipzig

Epitaphs of the University Church of Leipzig

A unique ensemble of funerary epitaphs was hastily evacuated from the medieval University Church of Leipzig before it was demolished in 1968. This high-quality collection has recently been restored and is now presented in a new building, erected on the site of the original church. Many partners and experts from a multitude of disciplines worked together to reinstate the epitaphs over a period of 15 years. The “Epitaph-Project” was the key activity of the Kustodie of Leipzig University between 2002 and 2017.

The project is outstanding in the European context as this unique ensemble reflects the international outreach both of Leipzig and its university as a centre of international trade and cultural exchange since the Middle Ages. Constructed by the Dominican order in 1240, the church, with its Gothic altarpiece, was passed to Leipzig University in 1543. Between 1543 and 1780, numerous funerary monuments were created for the academic elite and were presented in the church.

In the context of a university reform in 1968, which took place across the German Democratic Republic, the historical buildings in Leipzig were destroyed to make way for a modern, Socialist campus. In the case of the University Church, the building was dramatically demolished on 30 May 1968. Before the destruction of the church, amongst other artworks which were saved, 45 epitaphs, made from stone, wood or metal, were evacuated and survived in improvised storage.

In 2002, a conservation campaign, largely funded by donations, was initiated. From 2006 to 2017, a new building, reminiscent of the church, was erected on the original site. In the years 2014 to 2017, 27 of the epitaphs were installed in this new setting. Since December 2017 they are again presented to the public, allowing visitors of the church to view this unique collection of academic funerary epitaphs. 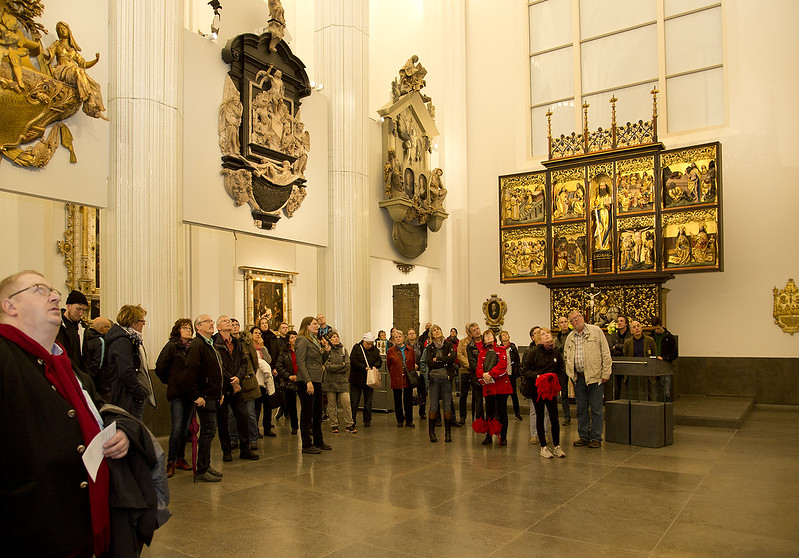 The conservation project of the selected epitaphs was executed by the Art Academy in Dresden, the University of Applied Sciences in Potsdam, several independent, private studios that specialise in stone, metal or polychrome surfaces, as well as by Leipzig University’s in-house restorers. Supporting substructures made of stainless steel were conceived by the engineer Thomas Bolze and the missing but necessary elements of the epitaphs were created by the artist Thomas Leu of Halle/Saale. The German Foundation for the Preservation of Monuments activated both its local and its nationwide network of private and public donors to assist the project.

The Jury observed that “this high-quality conservation of a valuable collection of art spanning several centuries, based on scientific research and documentation, represents the valorisation of a long-term effort to preserve the art treasures of the University Church of Leipzig and to successfully present and make them accessible in the original location of the University Church. Both the physical and social restoration of these artworks has been achieved while the new solution to present the artworks and their reassembly acknowledges how they were originally intended to be displayed”.