These 400-year-old garden structures were designed and constructed by the great painter-humanist Peter Paul Rubens (1577-1640) at his home in Antwerp. They are the only parts of Rubens’ original design that have survived more or less intact, and important features of the current Rubenshuis Museum. The various types of stone used in the construction were in precarious condition as a result of pollution, inappropriate interventions, water ingress and structural cracks. This two-year project, completed in 2019, has consolidated these important pieces of heritage for future generations by researching and applying the most up-to-date stone conservation measures. The project is a collaboration between the Museum Rubenshuis, the architecture office MAAT_WERK, the Royal Institute for Cultural Heritage and the City of Antwerp, which co-financed the project with the Agency for Immovable Heritage. The art and building historian Lode de Clercq contributed to the project’s research.

This ensemble of garden screen and pavilion was inspired by Roman architecture and 16th-century Italian painter-architects, such as Michelangelo and Giulio Romano, and represents the beginning of the Baroque period in the Low Countries. The garden screen appears in several of Rubens’ own artworks as well as in works by notable Flemish artists Anthony van Dyck and Jacob Jordaens. The screen, in the form of a triumphal arch, marked the passage to the garden and the pavilion was the garden’s focal point. The sculptures on both the garden screen and the pavilion were chosen to fit the iconographic concept of the artist as a scholarly painter. The sculptures of Mercury and Minerva which were placed on the top of the portico, for example, are intended as personifications of the art of painting and of knowledge and wisdom.

Though its 400-year survival attests to the wider understanding of the monuments’ importance, an unsuitable intervention in the mid-20th century led to the structure’s rapid decline, where such radical measures as the burning away of the paint layers were employed. 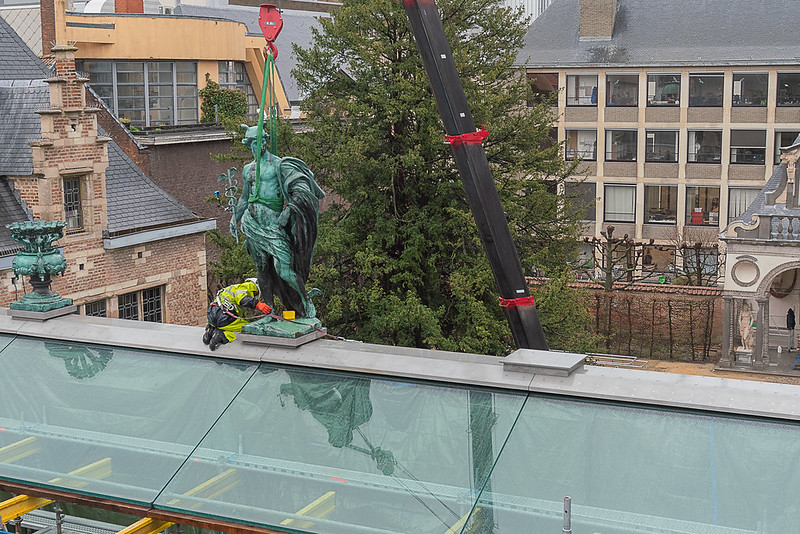 At that time a number of measures were taken to protect the structure from water damage and address the chemical damage that the stone was subject to in the ensuing years. This included the construction of a temporary wooden ‘roof’ over the façade of the screen. The temporary solution has now been replaced with a thoughtfully designed glass and steel canopy, offering a more effective, less visually obstructive and purely conservative solution to the damaging effects of the elements.

The Jury commended the “minimal conservation, involving both young and experienced conservators, to protect this iconic and vulnerable stonework of the garden screen, based on scientific research carried out to define the most appropriate conservation measures and which identified the original colour scheme of the garden pavilion. The glass canopy is designed with sensitivity to the garden screen, itself comprising physical objects which are also present in the paintings of Rubens, an artist of European and world significance”.