Since 2011, civil war has disastrously affected Syrian people and their rich cultural heritage. The pilot project Scanning for Syria was initiated to support rescue and preservation efforts of their archaeological heritage.

Assyrian clay tablets (dating from circa 1200 BC) from the site of Tell Sabi Abyad in northern Syria were excavated by archaeologists from Leiden University in the 1990s and were lost during the war. At the time, the archaeologists used silicon moulds to record the information the original tablets contained. Due to the degradable nature of silicon, the moulds have a short life expectancy of just 30 years and their physical reproductions suffer from limited readability, necessitating longer-lasting measures to preserve the scriptures they contain.

High-resolution 3D scans of the silicon moulds were made within the project, from which new physical replicas of the original objects could be recreated using a 3D printer. Innovations in digital imaging technology and computational analysis allowed for the development of new algorithms, which automatically and accurately generate digital reconstructions of the original clay tablets from the scanned 3D raw data of the silicon moulds.

Leiden University and the Delft University of Technology (The Netherlands) in partnership with the Catholic University of Leuven (Belgium) and Heidelberg University (Germany) carried out this collaborative work. The project received match funding from NWO KIEM-fund for Creative Industries. 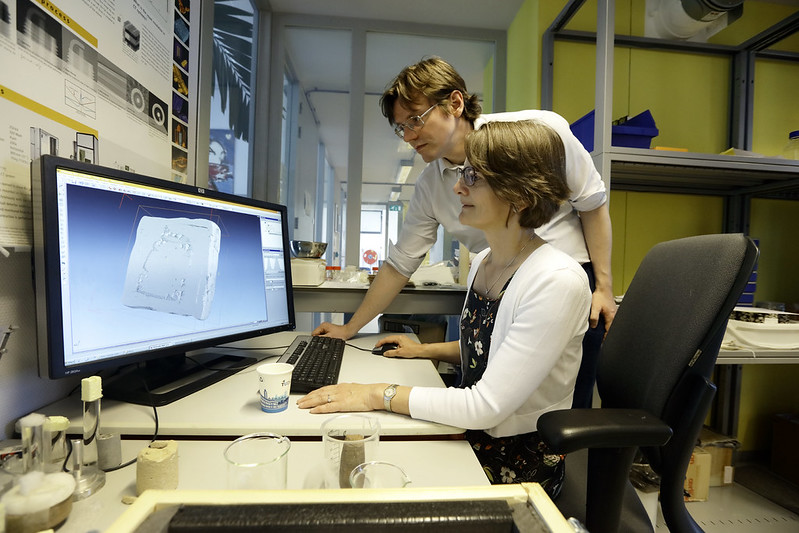 Scanning for Syria has safeguarded valuable archaeological information and made the objects accessible to both scholars and non-scholars, including migrant populations of Syrian descent. The high-quality images have assisted in deciphering the texts impressed on the Tell Sabi Abyad tablets and public events, such as pop-up exhibitions and a symposium, highlighted the use of these innovative methods for heritage preservation. Public understanding of the legacy of the Assyrian civilisation, which contributed significantly to the sciences in the fields of medicine, astronomy and geography and thus to European development, has also been improved.

“This project demonstrates the important role that accurate documentation has in the heritage preservation process. The innovative aspect of this project is its interdisciplinary nature. The research stems from the archaeological domain and combines a variety of methods from different application fields – such as micro CT-scanning from the medical domain, Forensic Computational Geometry for automatic feature recognition and advanced reproduction techniques such as 3D printing – including several academic institutions across France, Belgium, the Netherlands and Germany”, the Jury said.

“The project is now available as Open Data resources in both 2D and 3D, making it more widely accessible to a broader audience and interested scholars. The method is replicable and can also be applied to other, small size objects and thus offers new methods of digitally analysing and documenting small heritage artefacts – even objects that are incorporated or sealed into other material”, the Jury added. “It is also notable that Syrian archaeologists with refugee status in The Netherlands were actively included in the project, attesting to its positive social impact”, the Jury noted.