Home Winner The Ambulance for Monuments

The Ambulance for Monuments

May 07, 2020 | Education Training and Awareness-Raising | Romania

The Ambulance for Monuments project was launched in 2016 to rescue hundreds of heritage-listed buildings in Romania through a large network of active heritage organisations. These emergency interventions are carried out by experts, students and trained craftsmen on a voluntary basis with the support of local communities and authorities. At the heart of the project in each region is an intervention kit and a lorry equipped with tools, construction equipment and materials.

The conservation work is carried out by Asociația Monumentum (the owner and developer of the project), Asociația pentru Patrimoniu Activ-PACT, and Asociația Vernacular and Asociația Arhaic. The network is still growing, with a number of interventions planned for 2020 by four more organisations: Asociația Actum; Asociația Inima Olteniei; Asociația Atelierul de Patrimoniu; and Asociația Rost.

The Ambulance for Monuments project won the Public Choice Award 2020. It received the largest number of votes, cast via an online poll with the participation of over 12,000 citizens from all over Europe.

H.E. Klaus Werner Iohannis, President of Romania, in a special message read during the European Heritage Awards Ceremony, warmly congratulated the team that initiated this project: “Due to their vision, through the involvement of young people, of the specialists, authorities and sponsors, many monuments at risk have been saved during the five years since The Ambulance exists, thus testing the viability of a model of social cohesion emerging from cultural values and local identity.”

The President of Romania saluted the public that ranked The Ambulance for Monuments first in their choices. “I believe that many European citizens appreciated the Romanian project as a concrete expression of solidarity and an example for the appropriate use of the civic energies developed by culture and cultural heritage”, affirmed H.E. Klaus Werner Iohannis (read full message in English and Romanian).

Most of the project’s activities are related to the replacement of damaged roofs, securing walls from collapse, implementing proper water drainage and stabilising wall paintings. Since 2016, many interventions on local, national and World Heritage sites – such as churches, mills, manor houses, train stations and ruins of historic fortifications – have been carried out. 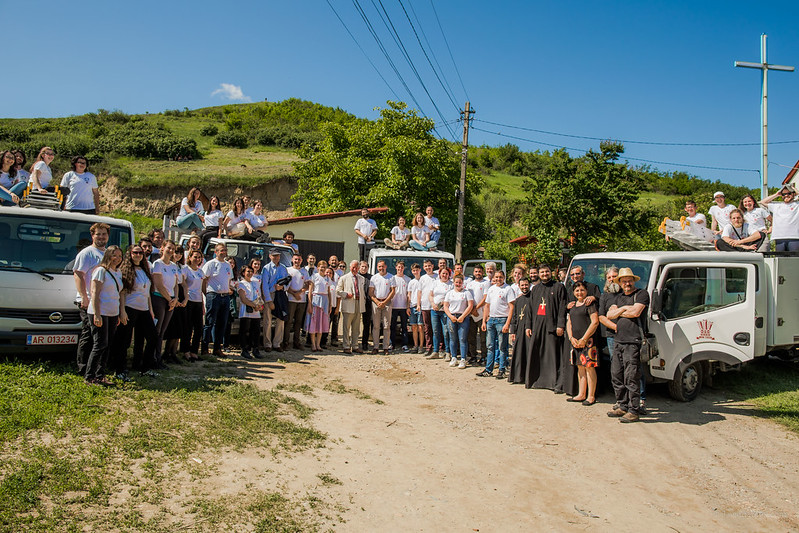 An important element of the project is its focus on local decision-making and ownership of the heritage. Ambulance for Monuments operates as an umbrella initiative, with each organisation working as a franchise and therefore maintaining the independence of each organisation to make decisions. Communities work together with the volunteers, hosting them in their homes and providing meals.

A close cooperation between private and public bodies has been created where local and regional authorities cover most of the costs for materials while private companies and donors fund additional materials, equipment and tools. Hundreds of mayors, priests, local councillors and other representatives of local communities have joined forces with the volunteers to curb the destruction of their own heritage. This has raised local communities’ awareness of the importance and value of cultural identity and encouraged a sense of stewardship.

The initiative also trains young experts and craftspeople at a local level, ensuring the sustainable and future maintenance of the buildings, addressing a problem that is present not just in Romania but in many other countries throughout Europe.

“The Ambulance for Monuments project acts with great sensitivity to emergency interventions and the maintenance and the restoration of heritage buildings. The initiative is active in many regions throughout Romania and especially focuses on neglected rural areas which are facing population decline. It trains volunteers to work in the field of restoration under the guidance of conservation experts, which is a good way of reviving forgotten techniques and skills. Also notable is the successful cooperation between organisations, authorities and other stakeholders at local, regional and national levels. This strong initiative could be adapted to a number of countries in Europe”, the Jury said.

The project has enjoyed the support of His Royal Highness The Prince of Wales and The Anglo-Romanian Trust for Traditional Architecture. In a video message, HRH The Prince of Wales congratulated the volunteers of The Ambulance for Monuments on their remarkable heritage achievement.