Though well cared for since its completion in 1779, the Iron Bridge, the first in the world to be constructed of iron and a symbol of the Industrial Revolution, has faced many challenges. Stresses in the ironwork dating from the original construction, compounded by ground movement in the Ironbridge Gorge and a 19th-century earthquake led English Heritage to undertake necessary interventions to preserve its original fabric to the greatest extent possible, returning the structure to its former glory and strength for the enjoyment of future generations.

Many partners and stakeholders were involved, including Historic England, The Ironbridge Gorge Museums Trust, Telford and Wrekin Council (the local authority), The Ironbridge Gorge World Heritage Site Steering Group, The Environment Agency and Severn Gorge Countryside Trust, as well as the local expert and former director of The Ironbridge Trust, David de Haan. As a charity, English Heritage funded the project largely from its own resources, with a sizeable amount of the funding also coming from donors, including the Hermann Reemtsma Foundation from Germany.

The bridge was in full use for over 150 years by ever-increasing traffic, before being designated a Scheduled Monument and closed to vehicles in 1934. The great significance of the Bridge was further recognised in 1986 when the bridge and other sites in the area of the Ironbridge Gorge were designated as a UNESCO World Heritage Site. 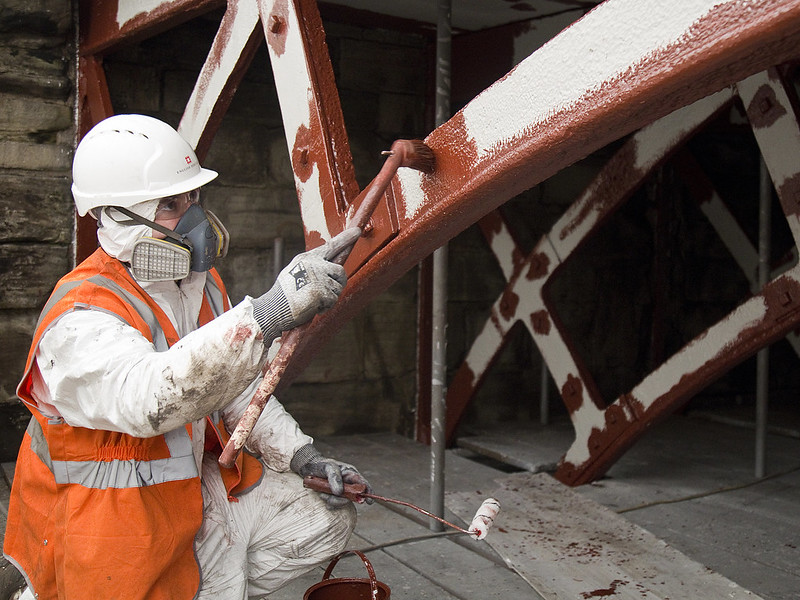 The conservation programme addressed all elements of the bridge: the iron radials and braces holding the bridge together, the deck plates and wedges, the main iron arch, and the stone abutments on either side of the Severn were all examined and deemed to be in need of repair. The cast iron pieces were identified as requiring careful cleaning and conservation and to either be re-installed or replaced where necessary. The cast iron elements were repaired, the masonry conserved, the deck resurfaced, and the entire structure cleaned and repainted in its original red-brown colour.

In addition, the profile of the Bridge and its significance has been amplified, which has resulted in the involvement of more people in its care, ensuring its legacy both now and in the future. A public access walkway was installed alongside the bridge, offering thousands of visitors a chance to see the conservation work in action.

The Jury remarked that “this iconic heritage, cared for throughout its lifetime, is a part of a larger whole, relating to the beginning of the Industrial Revolution and the surrounding industrial landscape. Its conservation approach is based on full respect of the original technology and was made possible through international collaboration and funding. It is a very good example of conservation in action, providing access to visitors and locals during the work”.