18 Ormond Quay Upper, constructed in the year 1843, is the ideal manifestation of a Dublin street building. Prominently located on the River Liffey in the city centre, the conservation of this modest yet elegant merchant building was undertaken by Dublin Civic Trust, an independent built heritage organisation, as a flagship demonstration project of best conservation practice of an historic urban building in the heart of Dublin. The majority of the project’s cost, approximately 90%, was funded by the Trust and with support from Dublin City Council, with the remainder funded by government heritage grants and private benefactors.

The Jury particularly appreciated that “the project was undertaken to specifically be a model for others, showing that the heritage of buildings common to Dublin has value and contributes to a more sustainable development of the city. The fundraising model is similarly replicable and was developed with the goal of it being repeated elsewhere”.

Dublin’s physical identity and primary architectural heritage is defined by its Georgian districts and public buildings built in the European neoclassical tradition, together with its modest commercial streets and river quays, composed of merchant building types dating from over three centuries of development. The city is now experiencing an influx of foreign investment capital that seeks to maximise site values, often leading to the loss of traditional streetscapes in favour of higher density development. Vacancy in historic street buildings is high, partly due to a systemic lack of investment in urban buildings for a variety of cultural reasons, including suburbanisation. The project at 18 Ormond Quay Upper vividly demonstrates the inherent value – cultural, social, environmental – of existing historic building stock to both the public and to policymakers. 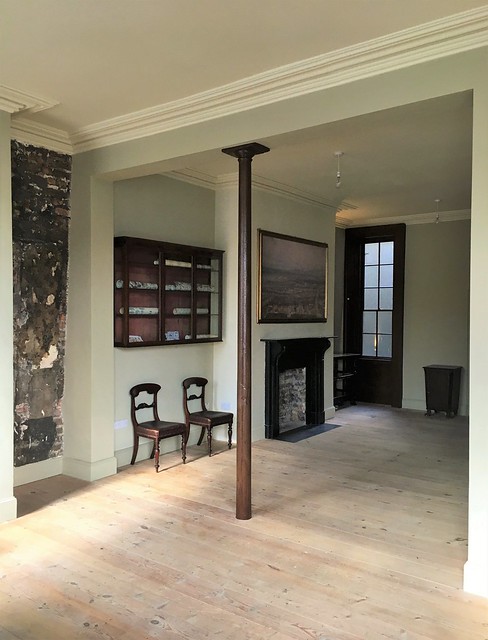 The works were undertaken solely by the Trust over a period of 4 years and involved the major structural consolidation of the building which was partly at risk of collapse. The original brickwork was restored using a traditional brick pointing technique called ‘wigging’, the Irish version of tuck pointing. The granite shop front was restored to its original 1843 appearance with research conducted to reinstate missing elements, including windows and doors. New lamps were commissioned to precisely replicate the oil lamps used in Dublin in the early 19th century. Internally, all original fabric was carefully retained and repaired with new services discreetly concealed. The original residence was reinstated in the upper floors, while authentic decoration and finishes were deployed throughout the building.

“Meticulous research was carried out with significant efforts made to ensure a conservation-restoration that was consistent with the original values of the building and to conserve as much of the remaining details as possible”, the Jury noted. “New features, such as the wallpaper, were carefully considered in terms of their authenticity. This humble, minimal conservation-restoration is nevertheless visible”.

The conservation work was publicly demonstrated through open access days, seminars and lectures delivered to the general public, architects, specifiers and crafts and tradespeople to showcase conservation practice and the solutions being applied. Dublin Civic Trust’s current use of the building and its ground floor shop as a centre for seminars, lectures and public engagement on building conservation and urban policy continues to successfully engage the community with its cultural inheritance.