The Aachen Battery is a German coastal battery from the First World War, located in the Provincial domain Atlantikwall Raversyde, on the coast of West Flanders near the city of Ostend. It is the only German WWI coastal battery of which enough remains for visitors to grasp its structure. This gives aNNo Architects’ restoration and regeneration of the site great European significance. aNNo Architects and the Province of West Flanders turned a collection of hard to interpret WWI bunkers, gun emplacements and artefacts into a readable and accessible heritage site, well-integrated in the surrounding dune landscape. In close collaboration with scenographic agency Exponanza, the story of the Great War was visualised and enhanced the visitors’ experience. The project was financed by the Province of West Flanders with the support of Tourism Flanders, through the impulse programme Flemish Coast 1914-1918, and the EU funded project “World War 2 Heritage” within the Interreg programme 2 Seas.

During the Second World War, the Aachen Battery was reused as part of the Atlantikwall, the Nazi-German defence line stretching along the west coast of Europe. Before its restoration, the site’s WWI story was drowned out by its WWII story. The restoration, which took place in continuous dialogue with various partners and stakeholders, managed to successfully present the site’s WWI story in a coherent way. 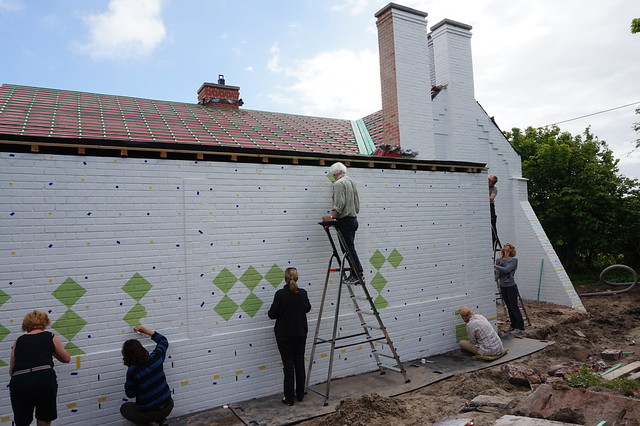 Physical accessibility was also improved. The Aachen Battery consists of a footpath along the coastline and connects restored bunkers and other buildings with the artillery positions. Wheelchair users can now follow the entire footpath and elements, such as tactile models, subtitled videos and 3D models, which are positioned at a suitable height with enough surrounding space. Throughout the path’s construction, the guiding principle was to disturb the ecosystem as little as possible, which led to the choice of clay seashells that integrates harmoniously into the dune landscape. The lighting of the path has a limited impact on the local fauna and is bat-friendly.

The Aachen Battery also presents the human stories connected to the site. In the reconstructed soldiers’ quarters, visitors can listen to the soldiers’ stories while resting in military hammocks. An important attempt was made to illustrate that the German soldiers, like the allies, also lived in difficult circumstances and that there were also many German casualties in the trenches.

“The revitalisation of the Aachen Battery is unique in its kind, with great European significance and pedagogical value. This well-restored heritage site calls for its visitors to reflect on how to build peace after a terrible war. The incorporation of contemporary art in the heritage space is laudable”, commented the Awards’ Jury.