Europa Nostra Award
The Agate Rooms (1780-1787) are situated on the upper floor of the Cold Bath pavilion at the Tsarskoe Selo State Museum-Preserve in St Petersburg. The suite of six rooms were part of Catherine the Great’s extensive building programme in the city, and specifically the designs of the little-known (outside Russia) Scottish architect Charles Cameron (1745-1812). Their form of decoration is remarkable, especially in terms of colour, with red jasper columns with gilt bronze capitals set against the walls lined with multicoloured jasper plates. The architectural historian Howard Colvin described them as ‘some of the most exquisitely elegant interiors in 18th century Europe’.

The rooms survived the devastations of the 20th century, including WWII, but had received no proper restoration treatment, so that the current project was able to perform conservation of the original 18th century finishes, largely undistorted by unwise renovations of later periods. This was an advantage, and removed from the debate some of the contentious issues arising from the replacement of lost elements. But the project required careful handling because jasper is a notoriously difficult stone to work. Earlier experience in recreating the Amber Room in the Catherine Palace was helpful, but here it was necessary to deal with the original forms. The outcome reinforces the validity of Colvin’s exceptional commendation. 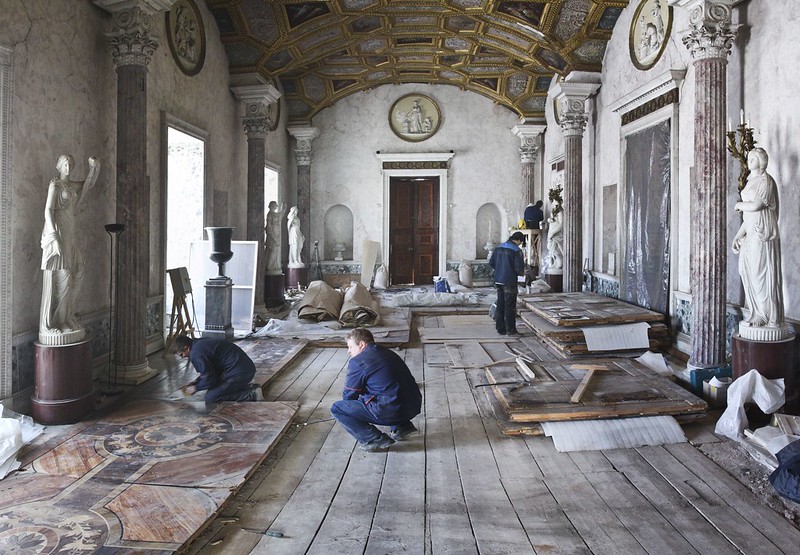 “The Jury particularly noted the quality of the science in this important project. Geological materials like jasper present special problems to the restorer: it is an unusual stone, where an unscientific approach could cause permanent damage. The results speak for themselves.”