This project is an exemplary conservation of an industrial site with full respect for its original fabric. The project to recover the Besòs Water Tower has been developed by the architects Antoni Vilanova and Eduard Simó, the technical architect Joan Olona, and the geographer and historian Mercè Tatjer in collaboration with Arxiu Historic Poblenou (AHPN), Archivio Storico delle Arti Contemporanee (ASAC) – Biennale Venezia, Museu d’Història de Barcelona (MUHBA), Museu d’Art Contemporani de Barcelona (MACBA), Fundació AGBAR, Fundació Ramon Calsina, and a collective of former MACOSA – Alstom workers. The project received funding from the Municipality of Barcelona and AGBAR.

The Besòs Water Tower, completed in 1882, was built to supply drinking water to Barcelona’s residents. In 1888, the tower was integrated into the steelworks complex of Can Girona (later known as MACOSA). The water tower is an iconic symbol of industrialised Barcelona. In 1993, the company closed and the complex was completely abandoned. In 1996, all of the buildings were demolished, except for the water tower and its valve house in annex.

In 2010, a conservation programme was initiated to restore the structures while preserving as much of the original fabric as possible and make them accessible for visitors. Two sections of spiral staircase were installed in the tower to allow access for visitors. These staircases were manufactured in galvanised steel in order to emphasise the difference between the original building and the new additions. This approach was also employed in the renovation of the metal structures that support the roof of the tower, with the replacement pieces reproduced in galvanised steel in the same measurements and characteristics of the original components. Traditional crafts and materials, such as the ceramic tiles which make up the the Catalan Vault that is traditional to this region, were also employed throughout the project. 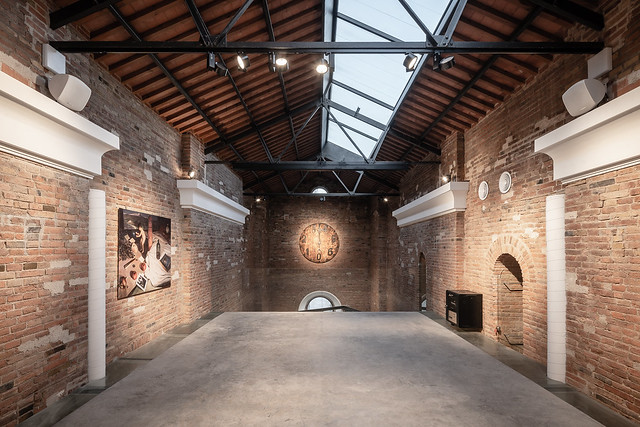 The restored site is now a new cultural centre for the industrial district of Poblenou, with innovative art installations enriching the visitor experience and establishing a dialogue between art and industrial heritage. In 2012, Himmelsrichtungen, a sculpture by the German abstract artist Blinky Palermo, which had been originally created for an industrial space at the Venice Biennale in 1976, was installed in the space. Lighting installations have been added to complement the original architecture while water sound effects were installed in an effort to remind visitors of the tower’s historic function.

The Jury greatly appreciated the efforts of the project, stating: “The intervention and final interior design are each of very high quality and clearly present the original function of the site, itself an important part of the industrial heritage of Barcelona. Contemporary artistic expression has been integrated, serving as a strong example for adaptive reuse of this type of heritage”.

The recovery of working-class history and its link to this industrial past was also attentively engaged. In the exhibition installations, the history of the site is presented along with the oral testimonies of the people who worked in the steelworks. “The community that worked here have contributed their testimonies to the museological parts of this project, adding an important collaborative element to this conservation and redevelopment project”, the Jury said.