This early Iron Age fortified settlement discovered in the 1930s posed serious problems regarding the conservation of wooden constructions. Part of the site had inappropriately been reconstructed shortly after the World War II and began to be dangerous for visitors, numbering over 300,000 a year. Between 2005 and 2006 various works were carried out. 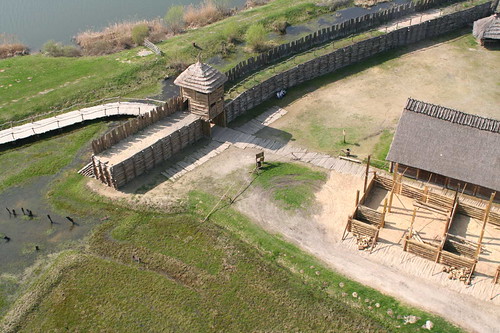 A pioneer monitoring system for ancient timber (checking the level of the ground-water, oxygen access, micro-fauna, fungi) was installed. 2- The wood underwent a programme of conservation and enlargement, through the use of the most recent technologies. A large part of ramparts, the gate, two rows of streets and log dwellings were appropriately reconstructed, giving access to handicapped visitors. The exhibition hall was renovated and equipped with central-heating using natural sources of energy, while the design was shifted from a modernistic to a more regional style, giving a possibility for European-wide exchange of temporary exhibitions. New experimental archaeology sites were arranged, increasing the possibility for the wider public to participate in interactive presentations and workshops.

”For the development of a sustainable system for the conservation of waterlogged timber, and for the interpretation and presentation of one of the most important archaeological sites and open air museums in Central Europe.”