Dating from the 14th and 15th centuries, the Château des Aix was built on a square ground plan and flanked by four towers at the angles. It underwent major transformations in the early 17th century when it acquired its present U-shaped plan around a courtyard through the demolition of one of the curtain walls, the creation of an open terrace, and the establishment of the main building flanked by turrets at its angles. In the 18th century, the interior was ornately decorated, most notably with stucco mounted on lathwork. By 1897 the property had fallen into shambles and many of its walls and floors had been destroyed in the hunt for a hypothetical treasure. Acquired by the present owners in 1990, conservation works began in 1995. 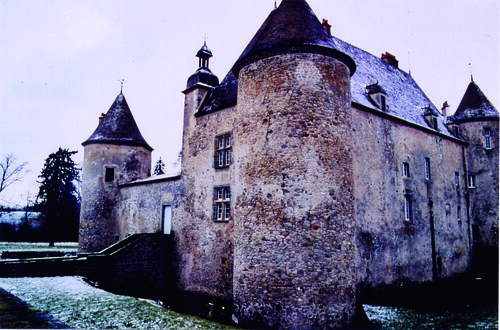 The timber framework and roof of the main building have since been entirely repaired. Walls have been consolidated by incorporating reinforced concrete into the masonry. All of the exterior woodwork, the collapsed ceilings and floors, the curtain walls, the two access bridges and the northeast pavilion have been restored. Works continue to be pursued with the restoration of the moat, the terrace, a second pavilion, an outbuilding, the entry-gate, the covering of the whole building, the well and its dome in the exterior courtyard, and the interior decoration. Although considerable work remains to be completed, this typical monument of the Bourbonnais has been rescued from imminent danger for the enjoyment of several future generations to come.

“For the appropriate safeguarding – with private means – of a château threatened by water infiltration and progressive deterioration, and for the careful restoration of its timber framework, roofs and supporting structures.”