The house was built in 1578. After decades of neglect it had declined into such a serious state of disrepair that it had been given up for lost when Landmark Trust acquired it in 1999. Though floorless and roofless, many unaltered primary features remained, including some fine timber mullioned windows and most of the original beams that made up the massive open truss roof in the main room. 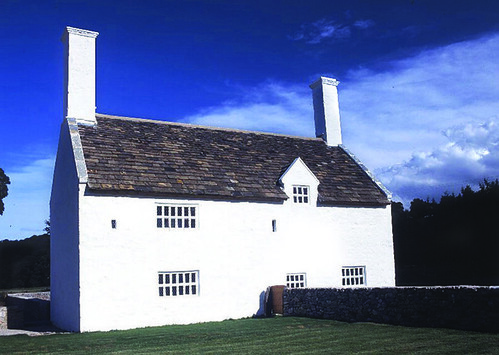 Since then, craftsmen using traditional techniques enabled much of the original fabric to be repaired and reinstated. The forecourt walls were reconstructed and the walls have been flush-pointed and lime-washed, as was customary in the 16th century. Most of the walls at eaves height also had to be rebuilt, while the collapsed timber roof frame was painstakingly reassembled and lifted back into position by a huge crane. The building is now let for self-catering holidays all year round, thereby generating income to ensure its maintenance.

“For the brave decision to rescue and carefully restore an important domestic house in an idyllic setting, which had fallen to ruin, and for making possible the experience of living in it.”