In August 1980, workers of the largest contemporary shipyard of Poland went on strike and demanded more civil liberties. After long negotiations between the strikers and the authorities, the Gdańsk Agreement was signed, which brought Solidarity (“Solidarność”) into existence, the first independent trade union in the Eastern Bloc. This was the beginning of a peaceful revolution that ended with the fall of communism in Eastern and Central Europe nearly a decade later.

Financed by the Polish Ministry of Culture and National Heritage, the City of Gdańsk and Pomorskie Region, the new headquarters of the European Solidarity Centre (“Europejskiego Centrum Solidarności” – ECS) with its permanent exhibition was opened to the public in 2014. It has commemorated, preserved and increased the awareness of Solidarity’s heritage in Poland and other countries ever since.

In 2014, the historic Gdańsk Shipyard, the birthplace of Solidarity, received the European Heritage Label with the ECS as its administrator, acknowledging Solidarity’s significance in Europe’s broader history. The European dimension of the ECS’s activities was also noted by the Jury: “This permanent exhibition strives to maintain activities and to make people understand the sense of solidarity with Europe and what makes Europe united. The long-term project has a multi-faceted approach and is based on good research.” 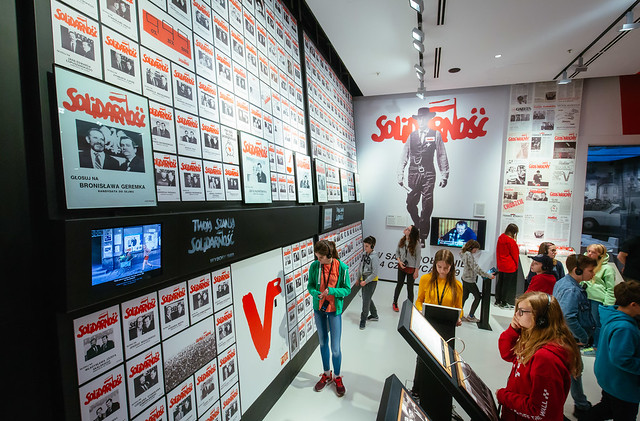 The creation of the exhibition was an interdisciplinary effort of historians, social scientists, museum experts, designers and engineers, and draws on material obtained from nearly 60 important museums, archives, local historians and former oppositionists across Central and Eastern Europe, including Bulgaria, the Czech Republic, Estonia, Lithuania, Latvia, Russia, Romania, Slovakia, Ukraine and Hungary, to enrich the exhibition and strengthen its international scope.

“The exhibition highlights the importance of labour and how this built the Europe that we know today. It highlights the value of activism for human rights, labour rights and political rights, and shows the importance of civic engagement in the advancement of these causes. The use of the project’s up-to-date exhibition techniques and participatory museological approach is of great value and exemplifies how to preserve stories and make them relevant to the contemporary world,” the Jury stated.

The ECS Education Section invites students from all kinds of educational backgrounds, including integration classes, to participate in educational workshops promoting civil engagement. To date, around 73,000 students have taken part. Moreover, more than 140 ‘subjective tours’ have been conducted, guided by witnesses and participants in the depicted events. The importance of the ECS’s mission was highlighted in 2016 when the institution was awarded with the Council of Europe Museum Prize.

Since 2019, the European Solidarity Centre further supports the efforts of the Polish Ministry of Culture and National Heritage (currently, the Ministry of Culture, National Heritage and Sport) in its attempt to have the historic Shipyard of Gdańsk inscribed on the UNESCO World Heritage List. This is done by organising debates and lectures, but also by running publishing and educational activities to further disseminate the international relevance of the birthplace of Solidarity and advocate for peaceful advocacy of human rights and dignity.