Home Winner Following in the Steps of Bulgarian Folklore

Following in the Steps of Bulgarian Folklore

May 25, 2021 | Education Training and Awareness-Raising | Bulgaria

Since 2014, the Taratanci Foundation has sought to present Bulgarian folklore to a contemporary public in new ways, in the form of educational workshops, exhibitions and products such as games and self-learning books. Through a surprising presentation of Bulgarian folk dances and folktales, the Taratanci Foundation strives to engage new audiences with the intangible cultural heritage of Bulgaria, based on the belief that in times of increasing intolerance and tension between nations and subcultures, folklore can be a tool for promoting cultural dialogue, stimulating social cohesion and mutual understanding.

In its activities, the Taratanci Foundation has been generously supported by the Bulgarian Charities Aid Foundation, Moto-Pfohe Conservation and Environmental Grants, the Bulgarian Ministry of Culture and Google Ad Grants, as well as various competitions such as National Champion of Bulgaria in the European Charlemagne Youth Prize 2018.

One of the Foundation’s main projects, “Following in the Steps of Bulgarian Folklore”, consists of graphical representations of 34 folk dances from all six ethnographic regions of Bulgaria. Bulgarian’s traditional circle dances were transformed into a graphic universal language, depicting the unique patterns that dancers make with their steps while dancing in a circle. The colourfully designed results were exhibited 17 times in Bulgaria and once in both Germany and Belgium. During the 2020 lockdown, all graphics were made available in an online exhibition, which received over 10,000 visitors. 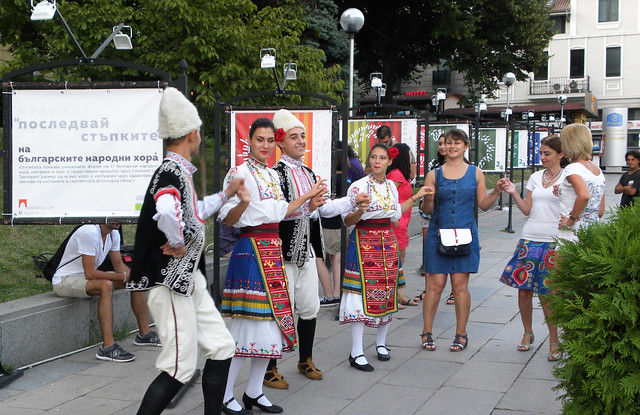 “This project addresses a problem present in traditional dance education in that there is usually not enough formal education available to learn traditional dance. It disseminates a positive message and opens up its reach beyond the usual traditional dance audience, also proving to be popular among young people which is unusual in this area,” the Jury stated.

The Jury praised Taratanci’s innovative approach to Bulgaria’s intangible heritage: “The research at the basis of the project has shown surprising links between the dances and natural patterns. It shows the value of taking intangible heritage elements and turning them into a social entrepreneurial project, with a holistic approach in creating several cultural experiences starting from one cultural element. This represents how cultural beings are holistic – all of our cultural production carries the traces of earlier cultural expressions.”

The Foundation aims to visualise circle dances from several places throughout and beyond Europe, such as Greece and Cyprus, Catalonia, Breton, Scotland, the Faroe Islands, Greek folk dances native to Anatolia, Armenia and Turkey. Circle dancing is a central part of the intangible heritage of many countries that strengthens communities and encourages togetherness. The Taratanci Foundation raises awareness of this intercultural aspect in order to stimulate mutual understanding and strengthen tolerance of intercultural differences.

Bulgarian folktales are the other focus of the Foundation’s activities. Folklore wisdom is deployed to stimulate children’s socio-emotional development and problem-solving skills. Most recently, the Taratanci Foundation has developed partnerships with organisations from four Balkan countries with similar folktale plots and characters (Greece, Albania, Serbia and Romania) in a joint project for preserving and promoting oral language through creating new experiences for children.