The village of Mutso is a remarkable fortified settlement which for centuries was the strongest outpost in northern Georgia, controlling the roads and protecting the state border. The village, strikingly integrated in the surrounding landscape thanks to the harmonious use of materials, was inhabited from the 10th century onwards. The harsh climate, the lack of arable land, the poor infrastructure together water shortages led to the depopulation of the village by the middle of the 20th-century. Through slow deterioration and lack of maintenance, this unique village was set to be lost. In 2014, a project to rehabilitate the settlement was initiated by the National Agency for Cultural Heritage Preservation of Georgia (NACHP) under the Ministry of Education, Science, Culture and Sports, with the support of the Georgian Government and in collaboration with other State institutions. The project was also supported through private funding, in particular the International Charity Foundation Cartu.

The village is spread over three semi-artificial terraces on a rocky mountain. A number of fortified-dwellings, varying between two and four storeys high, several towers, defensive walls, a number of shrines and crypts have been preserved. Throughout the implementation of the project, the local population was consulted with and encouraged to contribute, from the planning and preparatory phases to the technical and maintenance works. The traditional technique of dry schist masonry, the local knowledge of which was almost completely lost, has been transmitted to locals by Kisti craftsmen from the neighbouring region. As a result of this capacity-building, the future maintenance of the site has been ensured and the local community empowered to care for their own heritage.

The remoteness of the site and difficulty of the terrain is underlined by the extensive preparations that were required. These included the installation of a track and cable to transport materials up the mountain and the construction of a small hydroelectric power plant on a river near the village to provide electricity to the site. 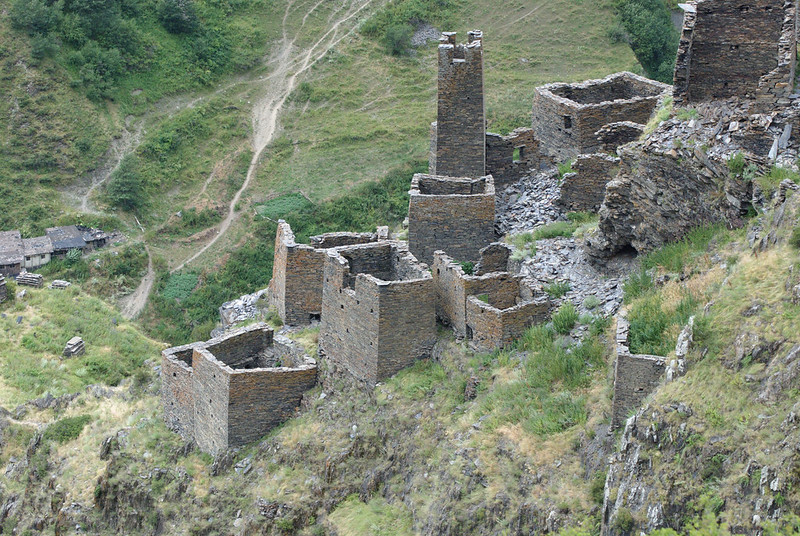 The structural stability of the site has been improved which has enabled the reuse of the dwellings. Now that the buildings are adapted to modern needs and basic infrastructural problems such as lack of electricity and communications have been resolved, families have started to return. A museum-reserve has been established on site by the NACHP to provide day-to-day management of the area. The project has set the necessary precedent for further revival of the mountainous, historical settlements of Georgia.

The jury noted that “this project addresses the depopulation of mountain communities, a challenge that is found throughout Europe. The restoration of this heritage has created an awareness among the local community of their intangible heritage and the history of the people of the Caucasus, in turn encouraging their re-engagement with this heritage. The continuation of traditional craftsmanship has been prioritised, ensuring its future maintenance. The overcoming of many challenges to the rehabilitation, including the difficult terrain and lack of infrastructure, is commendable.”