GEFAC – Group of Ethnography and Folklore of the Academy of Coimbra

Since its foundation in 1966, the Group of Ethnography and Folklore of the Academy of Coimbra (GEFAC) has collected and documented the manifold manifestations of Portuguese popular culture, including traditional music, dances, theatre, customs and habits of Portuguese rural communities, and transformed these into contemporary cultural expressions, from theatre performances to musical or dance spectacles, with the aim to make an inherently common heritage truly accessible to all.

The Jury was impressed by “the decades-long dedication of the Group of Ethnography and Folklore of the Academy of Coimbra to the collection of this Portuguese heritage which is valuable in the European context. This type of rural identity is now at risk of disappearing throughout Europe”.

Founded during the dictatorship, during the first decade of GEFAC’s existence, the Group’s interest in popular cultural expressions and the exploration of social themes in its performances evoked the suspicion of the fascist authorities, which forced the Group to operate semi-clandestinely. Officially accepted and appreciated only since the 1970s, over more than half a century GEFAC has developed an extensive archive of ethnographic research, conservation, contemporary adaptation and dissemination of Portuguese cultural heritage. The original performances based on GEFAC’s research into the traditional expressions and customs of all regions of Portugal, together with the formative scope of the Group, deserve particular praise. 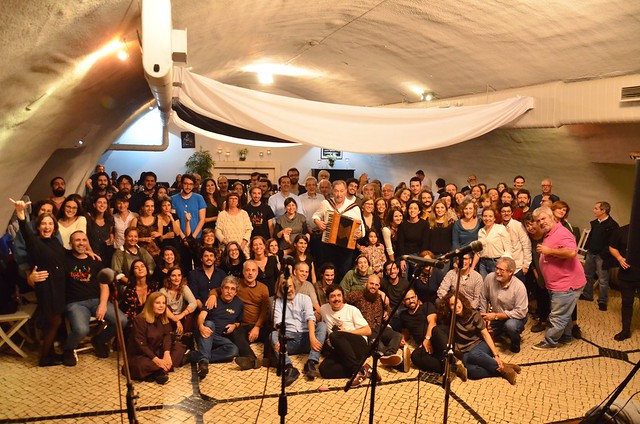 The most important of GEFAC’s initiatives is the biennial event “Jornadas de Cultura Popular” (Journeys of Popular Culture) organised since 1979. The cultural exchanges, enabled by this and other festivals in which GEFAC participates, greatly contribute to the quality of GEFAC’s productions and cohesion of its members, just as the annual addition to the Group of a number of international students (e.g. from Italy, Slovenia, Germany and Greece).

The Jury rarely encounters such versatile and productive cultural heritage initiatives: “The combination of research, performances, seminars, workshops and partnerships makes this an impressively lively and productive group. The interdisciplinary and international connections and collaborations help to safeguard the high-quality results of these many years of heritage protection. GEFAC’s work does not just recover lost memories, but gives body to the various expressions of popular culture and demonstrates that these constitute moments of reflection on our own time and space. GEFAC has succeeded in finding the formula of group longevity that many similar groups aspire to, resulting in a constant renewal of people.”

GEFAC’s research has also enabled communities to let their regional tangible and intangible heritage be recognised on an international level. The Caretos costume for example is characteristic of the carnival festivities of Podence, Trás-os-Montes and Alto Douro. Upon GEFAC’s encouragement, fashioning these traditional costumes, which had dwindled in popularity, was locally revived. The Caretos have since become internationally appreciated through its 2019 enlistment on the UNESCO Representative List of the Intangible Cultural Heritage of Humanity.