GeoCraftNL is a Minecraft server owned by the science centre GeoFort which allows children to build and recreate castles, windmills, churches and their own houses in a virtual 3D world. Minecraft is an online modelling platform, much like a digital LEGO, which is extremely popular with children and adolescents around the world. The whole of the Netherlands has been constructed by GeoFort in a 1:1 scale with approximately 1 trillion Minecraft blocks by using cadastral data and height maps. Each block represents 1㎥ in the ‘real’ Netherlands. 30,500 children now play a part in the GeoCraftNL community.

“Through the innovative use of a platform popular with children the project encourages them to engage in geospatial thinking and to use online photographs to reconstruct a range of cultural heritage sites and buildings. The skills acquired can be transferable to any region or city and the project illustrates the successful combination of both traditional and innovative teaching methods. An impressive number of participants has been engaged in a project which establishes strong links between the real and virtual environments without leaving either behind”, the jury stated.

Anyone who registers at the GeoCraftNL server can build a virtual version of the building they want and users are encouraged to recreate the built heritage of their own city. In order to recreate these historic buildings, they seek out pictures and information about the interior and exterior of each structure. The players can digitally wander through castles and hide secrets for other players to discover by using digital treasure maps. As they are increasingly engaged with the monuments virtually, the children are naturally more enthusiastic to visit these buildings in reality. This is also encouraged by offering prizes to children who find codes while building a virtual monument which they then receive when they visit the monument in real life.

The server is now being managed by a 19-year-old and has a community of 600 mayors (mostly aged 11), 20 commissioners of the King (each 15-years-old) and 6 ministers (each 18-years-old). GeoFort facilitates these participants and helps them to develop and manage the community, however the work is primarily being done by the young community itself. 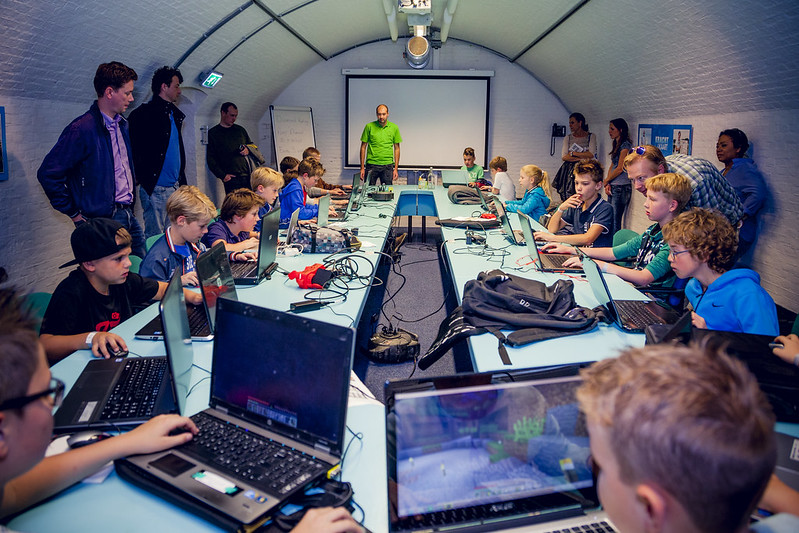 The science centre GeoFort in Herwijnen in the south of The Netherlands welcomed over 100,000 visitors in 2017. 50% of these were children participating in the daily GeoCraft workshops. GeoFort also organises events for museums, libraries, monuments and bookshops where children build the local area. The project is now being extended to construct UNESCO World Heritage Sites in Minecraft, demonstrating how the approach can be applied to the rest of the world. By using Minecraft, which has already been enthusiastically embraced by children and adolescents all around the world, GeoCraft allows the next generation to become better acquainted with cultural heritage in an engaging and fun way.

GeoFort worked with Geo-IT company Geodan and the Vrije Universiteit of Amsterdam to create this virtual version of the Netherlands. The GeoCraft project has received partial financial support from the Ministry of the Interior and Kingdom Relations and the Ministry of Infrastructure and Water.