The Hill Church in Sighisoara

Complete restoration of Gothic (13th-14th century) Hall-Church with three naves located in a World Heritage Site. Following the mass emigration of the Saxon community in the 20th century, the church lost its function and gradually deteriorated to a deplorable condition. 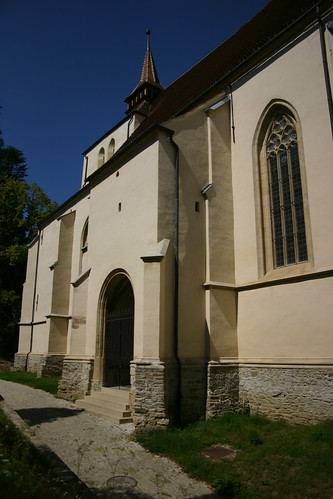 From 1992 to 2003, restoration was carried out, particularly of the walls and vaults of the roof which had partly collapsed. The surroundings were rehabilitated through the construction of cobbled pavements, slopes, and underground channelling of rainwater, thereby bringing an end to the humidity. The vaults and floors were reinforced with a removable metal structure and the wall paintings were restored. All the new materials which have been built into the original structure can be removed and changed at any time. The church now also houses a museum for collecting objects of the abandoned evangelical churches from Transylvania.

“For the thorough restoration and adroit structural consolidation of a much deteriorated and abandoned church, and for its adaptation as a cultural centre and museum for Saxon art.”