On the 11th March 1938, Austria was annexed by Nazi Germany. The Zeituhr 1938 project was created by a group of filmmakers, Historians and programmers to tell the story of the events and decisions leading up to the so-called Anschluss of Austria, on the occasion of its 80th anniversary. This large-scale digital project was produced by Dr Frederick Baker and his independent media production company Filmbäckerei in co-operation with Dr Heidemarie Uhl, Dr Michaela Raggam-Blesch, Dr Eva Gressel and Pauli Aro at Academy of Sciences in Vienna, digital engineering by Thomas Prieler (Web-Tech) Christoph Kovacs/ Gernot Huber (Sensotix) and design Raimund Schumacher (Lost in the Garden). Funding was received from the Memorial Year 2018 fund of the Austrian Federal Chancellery, the Austrian National Fund of the Victims of Fascism, Austrian Future Funds, City of Vienna Student Research Scholarship funds, the Academy of Sciences and Haus der Geschichte Österreich.

On the anniversary of the Anschluss in March 2018, the Zeituhr 1938 project reached thousands of users via the internet, radio, television, and mobile phones, as well as through analogue media such as postcards, lectures, and print. Most significantly, the present Chancellery on the Ballhausplatz in the centre of Vienna served as a screen on which the story of the annexation was projected, using films, photos and sound recordings. During the Anschluss, this was the scene of the power struggle between the local Nazis (following orders from Berlin) and the last Austrian President. Since the premiere in March, Zeituhr 1938 has continued to have an impact. It is the first digital exhibition on the website of the new Austrian Museum of History in Vienna.

“This project has used innovative media to cast new light on pivotal historical moments in which crucial political decisions were taken. Curiosity was the driving force that provoked this historical storytelling, evoking the collective memory of eyewitnesses. The project’s pioneering technology allows for the constructive mediation of historical events,” the jury said. 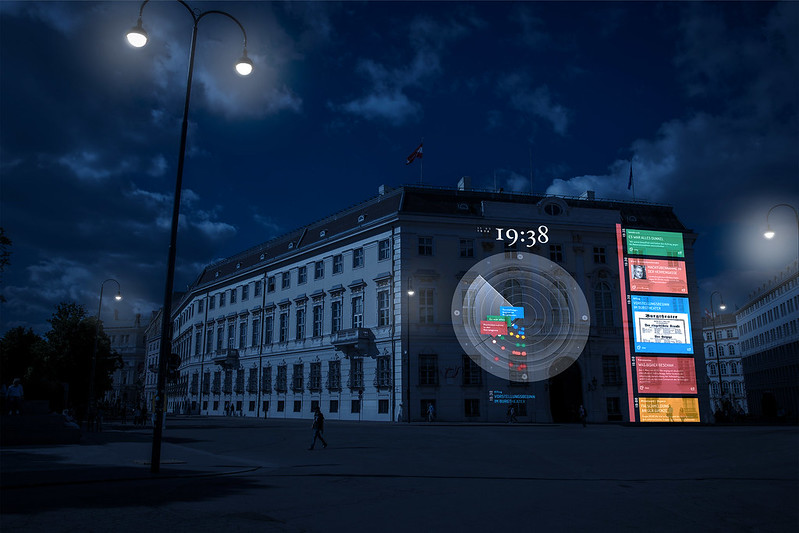 Its digital nature allowed Zeituhr 1938 to reach many users, including those in younger age groups who only know about the Anschluss from what they have learned in history books. “The project has an impressively designed, interactive, webportal that enhances the user experience and which is especially attractive for young users,” the jury noted, “The project not only preserves intangible heritage, but makes sure that it is clearly communicated to future generations.”

“This innovative approach enables a more nuanced understanding of individual responsibilities in securing democracy and the common values of society. It expresses the dangers of organised propaganda, which, in combination with a compliant media system, can encroach on democratic values and foster unfounded cultural and social bias,” the jury stated.