May 14, 2018 | Education Training and Awareness-Raising | Belgium

Ief Postino is an awareness-raising project addressing the history of migration in Europe, specifically between the Belgian province of Limburg and Italy. The project has used traditional communication methods to revive the links between the communities in both countries. Its basis in the human experience of migration is one that is as relevant today as it has been over the past 70 years. Letters were exchanged from Belgium to Italy and vice-versa, hand-delivered via a typically Italian, three-wheeled Piaggio Ape. The Ief Postino project was co-produced and co-financed by the Centre for Cultural Heritage of the Limburg Province and the Belgian public television broadcaster

2016 marked the 70th anniversary of the first Italian migrants’ arrival to work in Limburg’s coal mines. On the occasion of this anniversary, the Ief Postino project aimed to, once again, strengthen the connections between the Italian Limburgers and the Limburger Italians. Moreover, the project provided an opportunity to introduce Limburg’s industrial past, the mining culture, and recent developments in the mining region to the general public.

Theatre performer Ief Gilis played Ief Postino (Postman Ief) and went in search of authentic stories and anecdotes between Limburgers and the acquaintances, family, old sweethearts and school friends that they left behind in Italy. The Limburgers wrote letters that Ief Postino collected and delivered to Italy personally, using his Piaggio Ape. The recipients in Italy would then send a letter back to Belgium. The Ape was converted into a post office and meeting place for the collection of personal stories

Following his journey, Ief Postino returned to a big street party at which Italians, Limburgers, Limburger-Italians and Italian-Limburgers all came together and this is where the Belgian and Italian letter writers and their recipients could meet up with one another and their families. 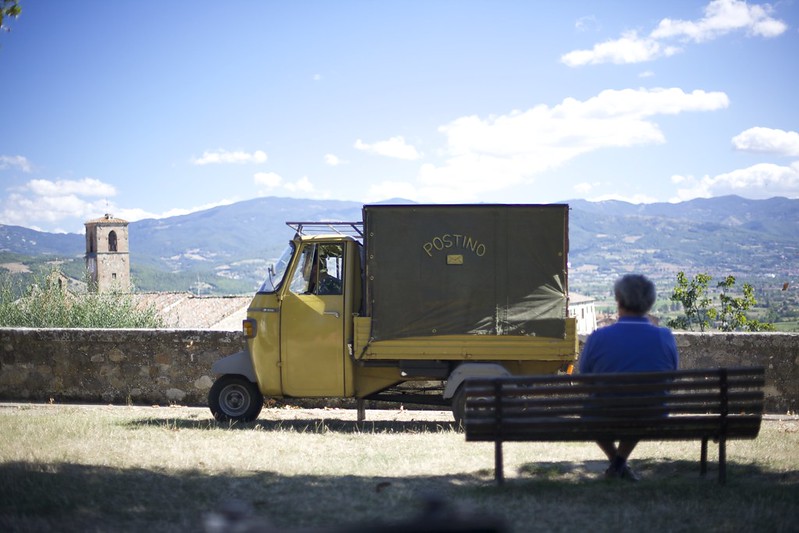 The project was filmed and broadcast on public television in the autumn of 2016 with 2 episodes being shown every week during the programme Iedereen Beroemd with an estimated 1,000,000 viewers for each episode. Supplementary stories were made available in parallel via the Ief Postino Facebook page and weekly newspaper articles were published in the newspaper Het Belang van Limburg, reaching 105,000 readers each day. A film, a book and an interactive theatre performance, often performed at schools and social-cultural organisations, has followed the initial project.

The jury commended Ief Postino as “a well judged small-scale project which enhances understanding of intangible aspects of community diaspora in a time of economic change in Europe. Through personal stories and traditional methods of communication, the project has maintained historical community links between two disparate areas of the continent”.