Illa del Rei is an island in the port of Mahon, Menorca, Spain. Its main cultural landmark is a naval hospital founded by the English navy in 1711. After the hospital fell into disuse in 1964, it was abandoned and the buildings greatly deteriorated. The restoration and revitalisation of Illa del Rei are the result of a fruitful collaboration between Fundació de l’Hospital de l’Illa del Rei, established in 2004 by local volunteers, who restored the naval hospital and turned it into a museum, and the Swiss modern and contemporary art gallery Hauser & Wirth, which joined them to restore and sensitively repurpose the Langara outbuildings as an art space. Whereas Hauser & Wirth used their own resources for the restoration, the Fundació received funding from individuals, authorities and organisations including the Balearic Islands Government, the Foundation for Tourism in the Balearic Islands FUNDATUR and the Municipality of Mahon.

The Fundació’s initiative is an impressive example of civic engagement. Hundreds of volunteers worked to clear invasive vegetation and debris and then raised funds and awareness to finally restore the hospital using traditional techniques and materials. Besides the promotion of the naval hospital’s history with the museum and an ongoing programme of activities, the Fundació has also engaged several local institutions, such as the inmates of Menorca’s penitentiary centre, in the reproduction of the mosaic of the Paleochristian basilica on the island. 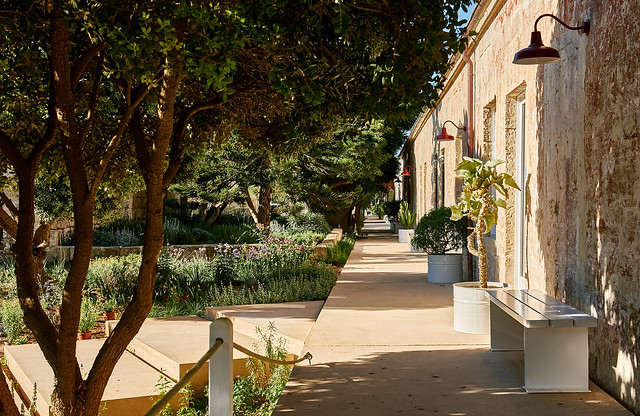 When Hauser & Wirth joined the Fundació in 2016, a framework was drawn up to define the uses of the island, the extent of the conservation project, led by the architects Luis Laplace and Miguel Sintes, and a clear and a clear strategic environmental plan. In 2021, Hauser & Wirth Menorca was opened, comprising an exhibition space for contemporary art, an outdoor sculpture trail, and a garden designed by Piet Oudolf. With educational, sustainability and conservation values at its core, the art centre runs a rich educational programme together with local organisations.

In terms of innovation and sustainability, the Fundació and Hauser & Wirth have collaborated to regrow a wild olive tree forest and a fruit orchard, as well as cleaning the area of invasive species. The creation of groves among the outdoor benches provide shelter for an internationally protected lizard species native to the island.

“The project to rehabilitate the Illa del Rei represents an impressive level of citizens’ engagement and commitment to the conservation of heritage. The high-quality restoration was implemented with full respect for the landscape in which it is found, with the original garden and the safeguarding of native plants and species carefully considered. Ecological sustainability was also ensured by implementing a combination of traditional and contemporary technologies to reuse water,” stated the Awards’ Jury.