Home Winner The Invention of a Guilty Party

The Invention of a Guilty Party

The exhibition The Invention of a Guilty Party: The case of little Simone of Trento from propaganda to history (“L’invenzione del colpevole: Il caso di Simonino da Trento dalla propaganda alla storia”) sheds light on a historical episode that left a deep mark on the history of Trento, Italy. The work admiringly stimulates critical reflection on the construction of a hostile “other”; the spread of intolerant behaviour towards people of differing race, religion or culture, stoked by prejudice and stereotypes; and the power of propaganda and fake news.

The exhibition was organised by Museo Diocesano Tridentino and is based on extensive research in collaboration with the Dipartimento di Lettere e Filosofia, the Facoltà di Giurisprudenza of the University of Trento, the Archivio Diocesano Tridentino and the Fondazione Museo Storico of Trento. The project was funded by the Autonomous Province of Trento, the Fondazione Caritro and the Comune di Trento.

In 1475, Trento was witness to the death of two-year old Simone resulting in the conviction of three Jewish families for ‘ritual murder’ on the basis of confessions obtained under torture and strenghtend by anti-Jewish propaganda created by the Bishop of the period. Simonino da Trento was subsequently worshipped as a martyr well into the mid-20th century. 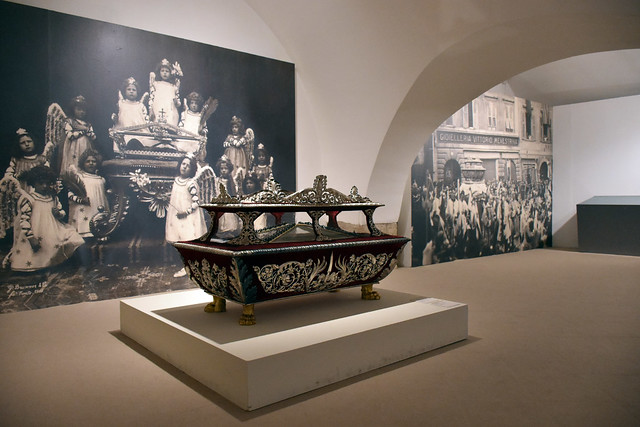 The re-examination of the court documents in 1965 led to the Church’s abolition of the cult. Since then, the chapels devoted to Simonino da Trento had been closed and iconographical works relating to the cult were stored away from public eye. The Museum has now bravely picked up this historical thread and attached it to the present, aiming to make the public aware of the dangerous re-emergence of racist and anti-Semitic tendencies and pointing to the importance of independent critical thought to combat intolerance.

The Jury praised the great significance of the presentation of the ‘case of Simonino’ within a contemporary framework: “This is a project of great relevance for the contemporary world in that it employs a method to create critical thinking related to historical processes and deconstructs a historical example of fake news. The project, a strong collaboration with many researchers, is not just an exhibition but a process that is ongoing and will continue.”

As part of the exhibition, various teaching materials were prepared for first and second level secondary school pupils, including a walk through the city looking for evidence of the Hebrew Ashkenazi community of Trento alongside the relevant locations to the ‘case of Simonino’. Due to its importance on regional, national and international levels, the ‘case of Simonino’ will be embedded in the permanent display of the Museum.