Designed in 1935-1956 by the young architect Paul Amaury Michel as his private home, it is one of the most emblematic examples of Modernism in Belgium. The abandoned building was in a state of dilapidation when it was acquired by the present owner in 1997. All materials were worn, particularly the glass cobbles of the rear façade which were dislodged and in imminent danger of collapse. 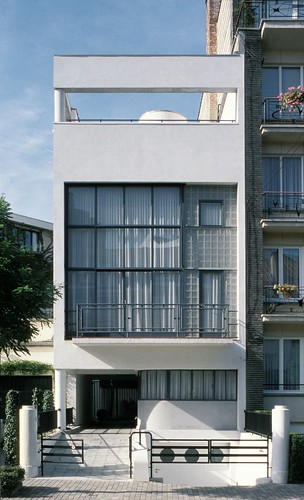 The rehabilitation of the building comprised of two aspects: a spatial project for the re-inhabiting of the house in the 21st century and a restoration project to save the building from total ruin. Most notably, the front porch was re-opened, thereby restoring the house which was a key element of the original design. The authenticity of the interior furnishing and decorations was admirably preserved during the renovation. The project is characterised by the equilibrium between the truthful return to the original spatial configuration and the adaptation of the building to modern-day comfort requirements.

“For the renovation of a paradigm of the innovative and pragmatic architecture of the 1930s, accomplished with great efficiency and respecting the simplicity of the original concept.”