“La Paranza” is a cooperative of young friends who have worked with enthusiasm to recover their local heritage and to transform the catacombs of Naples into a vibrant attraction for visitors, also bringing about the tangible revitalisation of the Sanità neighbourhood.

In 2000, the arrival of a new parish priest at the Basilica of Santa Maria della Sanità, Don Antonio Loffredo, marked the beginning of a process of redevelopment of the district’s cultural heritage. La Paranza Onlus, a social cooperative to create job opportunities for youth through cultural heritage regeneration, was established in 2006 and immediately received support from the Archdiocese of Naples for their activities.

After years of neglect, the catacombs of San Gaudioso were entrusted to La Paranza. The cooperative then responded to a call for proposals for cultural projects launched by the “Fondazione CON IL SUD” in 2008, which they were granted and which provided them with the funding to begin the process of recovering and subsequently opening the Catacombs of San Gennaro to the public in the same year. 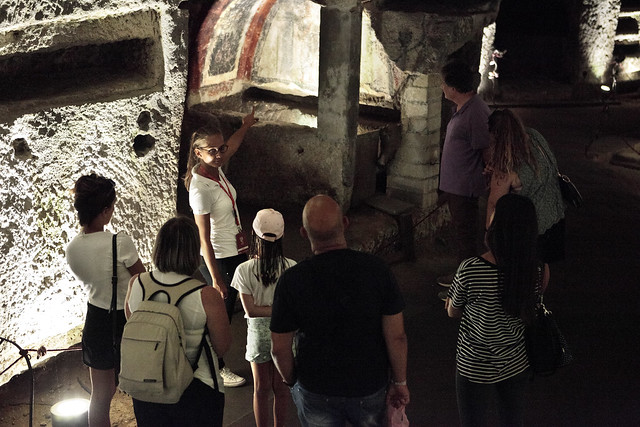 La Paranza Cooperative’s team includes archaeologists, restorers and art historians involved in the study, supervision and restoration of the frescoes and mosaics in the Catacombs. To date, 13,000 m2 of the Catacombs have been recovered, 44 jobs for young people created and in 2019, 160,000 people visited the sites.

Their activities have greatly contributed to reviving the city’s image through the rediscovery of the Sanità’s artistic and cultural heritage and the implementation of an innovative, bottom-up management structure. It has also created training courses for its guides and job placement and networking schemes for people, organisations and associations.

La Paranza has also reopened and repurposed several churches and buildings in the district. For example, some have been repurposed as B&Bs, while the Sant’Aspreno ai Crociferi Church is now the art studio of the Italian artist Jago, and the San Severo alla Sanità Church hosts a recording studio and the youth orchestra Sanitansamble. The church of San Vincenzo and the Cristallini73 building have become public spaces where young people from the neighbourhood can practice theatre and sports for free.

“This cooperative of young people has undertaken an extraordinary task for the benefit of heritage and the people of Naples, creating a sense of ownership among the community for their local heritage. They have helped transforming a previously underdeveloped area into an attractive destination for tourists, while recovering a fascinating, hidden element of the city’s heritage. With great determination and ingenuity, La Paranza Cooperative has demonstrated how to care for heritage, in spite of limited resources,” emphasised the Awards’ Jury.