Built by Horta in 1893 for his friend Eugène Autrique, the Maison Autrique is a major achievement in the history of architecture. It constitutes the missing link between traditional private architecture and the emerging Art Nouveau style. The fine iron pillars and columns of the façade, sgraffito, stained-glass, mosaics, and importance of natural light and decorative elements of floral inspiration are all Art Nouveau characteristics which were to be developed and magnified by Horta and his disciples. 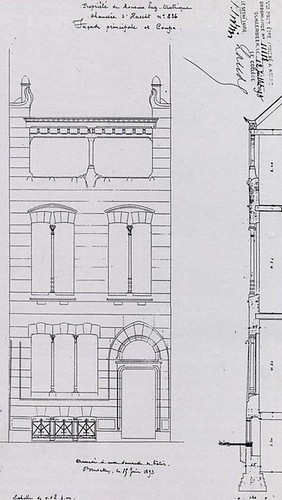 Occupied throughout the 20th century by several inhabitants, this private dwelling had lost its spatial coherence and original spirit, as a result of the diverse transformations that had occurred over time (partitions, painting, adaptation of the electricity, heating and sanitary equipment). In 1997, the municipality of Schaerbeek acquired the building and embarked on an ambitious project to restore it to its former splendour. The project provided an opportunity to develop techniques for the restoration of little utilised materials (linoleum, marble-stucco), and was carried out with support from public funds including the EU Structural Funds. A scenography, made possible through the generosity of private sponsors, brings the building back to life through a combination of old objects and contemporary visual techniques. Open to the public since 2004 and managed by a non-profit organisation, the Maison Autrique has become the principal attraction in this municipality of Brussels.

“For the scrupulous restoration of an early masterpiece of Victor Horta, and for the creation of a scenography which pays tribute to the private architecture of Brussels and opens a door to an imaginary world.”