The restoration of Mas de Burot, a traditional rural building found in the Els Ports Natural Park, was based on traditional bioconstruction techniques and underlines the value of traditional architecture in this area. In addition to the intrinsic value of its 19th-century farmhouse, Mas de Burot is also an important source of architectural, historical and ethnological knowledge and is a witness to the social history of 20th-century Spain. The project to restore the farmhouse was undertaken and funded by the Municipality of Horta de Sant Joan.

“The relationship between the heritage value of the house and tourism is sustainable and the funding from the local authority ensured that the project was embedded in localism”, the Jury said.

From 2004 to 2015, the Els Ports Natural Park conducted an inventory and study of the traditional rural architecture in the park. In 2015, a characterisation study of the traditional buildings of Los Ports was ordered, and, in 2016, a good practices manual was published to lead interventions in rural architectural heritage. Following these initial steps, the Mas de Burot farmhouse was selected to be restored and become a resource for sustainable tourism, allowing tourists and heritage professionals alike to view an authentic example of this traditional architecture.

The house had been abandoned for a number of years and faced extensive structural issues, including a collapsed roof, water ingress and the deterioration of its typical wattle and plaster partition walls. The upper floor and stairs had been totally lost. The fate of the house wasis itself reflective of the progressive abandonment of traditional activities and rural life in mountain areas and the associated architecture. 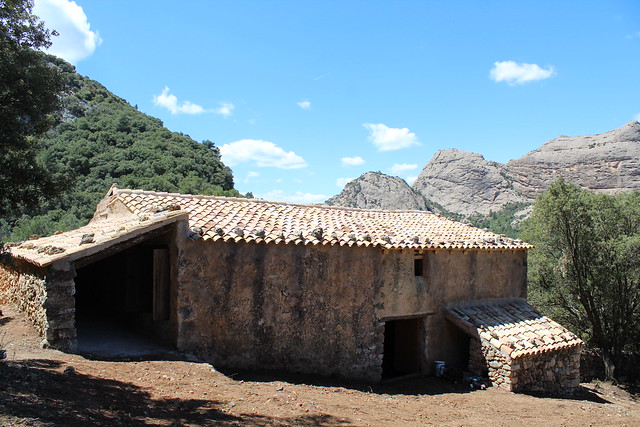 Extensive works were required to recover the house as it had originally existed, including the demolition or consolidation of unstable elements, restoring elements which had survived and reconstructing the partition walls and other interior features. All of the materials that were used in this construction are natural and sourced from the environment itself. The house remains without electricity, water or other utilities.

During the rehabilitation, the construction company conducted practical demonstrations of the traditional techniques employed during the restoration works. The knowledge acquired during the works will be of great use for professionals working on similar projects in the future.

The house now hosts guided tours for both tourists and architecture and heritage professionals. During the guided tours life in Els Ports is explained from different points of view. The Jury was impressed by this holistic approach to the conservation project.

“This sensitive conservation of a modest type of heritage included both the restoration of rural architecture and skills related to it. The renovation was fully integrated into the development and management of the natural park and landscape and is reflective of the inhabitants’ own relationship with nature. The dissemination of the manual that they produced is a best practice example for the sharing of information for similar projects”, the Jury said.