The conservation work tried to resolve the following problems, the arch intrados displayed areas of strong washed off joints and areas where that same washing had produced the calcification of the surface to a certain degree. None of the two areas, in spite of these alterations, displayed structural problems that would require an urgent repair. 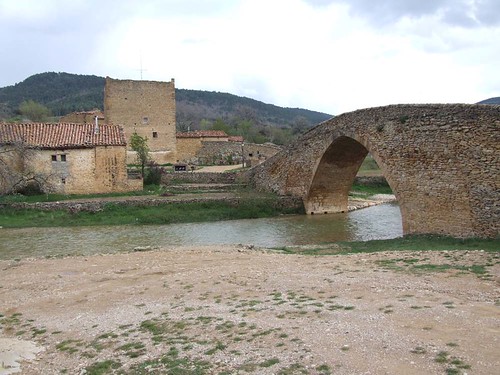 The surfaces were partially affected by the presence of upper and lower vegetation. The upper vegetation offered a higher threat since it deepened its roots between the joints of the stones. It was located in the base of the piers of the bridge and at the height of its pavement on the face, that is to say, where the water penetrated the joints between stones in search for an exit. Also the conditioning of the river’s quay and of the lighting system were urgent interventions.

“The project is admired for the high quality of the research preceding the conservation of the bridge as well as for the excellent conservation work itself. Also the cooperation between two villages, two provinces and two regions is highly valued.”