The monument of Episkopi on Sikinos, one of the smallest Cycladic islands, is a Roman mausoleum dating back to the 3rd century. Because of its conversion to a Byzantine church, it was continuously used and has therefore survived nearly intact. Its ancient structure, combined with interventions from several historical periods, offers an incomparable palimpsest of archaeological periods that is rarely preserved in ancient monuments. Severely affected by destructive earthquakes and human interventions throughout the centuries, the monument was abandoned in the 20th century. The Ephorate of Antiquities of the Cyclades decided to restore the building in 2016 and reopen it to the public. The restoration study was undertaken by the scientific personnel of the Ephorate; Elliniki Etairia – Society for the Environment and Cultural Heritage and the A. & M. Martinou Foundation funded the structural and geotechnical studies. The restoration project was financed by the European Regional Development Fund and the Region of South Aegean.

The impressive ancient mausoleum that was created on the verge of Late Antiquity, has been an important landmark for the island of Sikinos throughout the centuries. The archaeological research that took place during its restoration significantly increased knowledge of funerary monuments of the Roman period in the Eastern Mediterranean Region as well as of Cycladic Byzantine churches. During the restoration work on Episkopi, archaeologists made many valuable discoveries, such as inscriptions and remnants of Roman and Byzantine wall paintings, which were preserved by implementing a microclimate monitoring system. The most important find was the hermetically sealed grave of a woman of high rank, named ‘Neiko’, which was dated to the 3rd century. 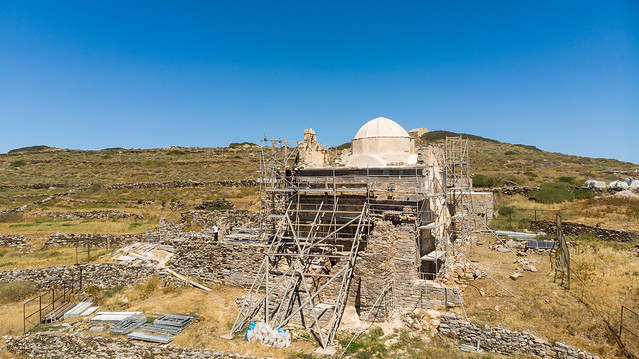 The community of Sikinos was strongly committed to the restoration of the monument of Episkopi and provided housing, transportation and even equipment. With the monument having been closed to the public for half a century, the local community now aspires to reinstate its vital bond with this cultural heritage site, first by re-establishing the annual feast in August for the celebration of the Dormition of Virgin Mary and then by launching cultural activities in this unique archaeological setting, in collaboration with the Ephorate of Antiquities of Cyclades.

“This project combined meticulous research with cautious conservation, resulting in a high-quality restoration. The monument of Episkopi is a cultural landmark and a source of pride for this small island community. Building materials were reused as much as possible and new masonry was incorporated using locally collected stones. The combination of architectural elements of a Roman mausoleum in a Byzantine church forms a unique monument that is simply striking,” emphasised the Awards’ Jury.