In its admirable activities, the association receives financial support from the EU LEADER Programme through the local development company Serranía Southwest Sevillana, as well as some support from the Morón de la Frontera Town Council. In 2011, the association’s efforts to revitalise the traditional craftsmanship of lime-making in Morón de la Frontera was rewarded with its nomination for the UNESCO List of Intangible Cultural Heritage.

In addition to conserving and restoring the houses where the kiln-workers and their families worked and dwelled, in collaboration with craft production company Gordillos cal de Morón, the association raises awareness and promotes traditional lime production with the Lime Museum of Morón, which annually receives around 4,000 students, professionals and tourists. The Museum frequently organises tours guided by retired lime-workers, who demonstrate the traditional lime-making process and illuminate the visitors on how the current landscape of Morón was co-created by the natural properties of the area and its inhabitants and their traditional practices, from cattle herding and olive trees cultivation to the production of lime. 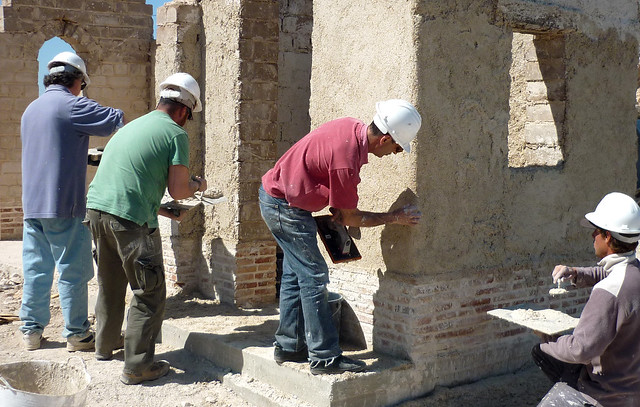 The Jury was impressed by the intergenerational aspect of the association’s work, as well as its successful circular economy approach: “This project is a strong example of supporting traditional, authentic work and lime-making techniques which have relevance to the local community today. It is a strong example of a circular economy with a positive impact on the families in the village in which the project takes place. It is responsible for the preservation of the tradition of that time and has added a contemporary touch with consideration for contemporary issues in using filters in the production process to reduce carbon emissions.”

Hornos de la Cal de Morón’s environmental sustainability is central to the association’s activities, as it seeks to expand the role of traditionally produced lime in bioclimatic construction – working with nature instead of against it. In collaboration with academic partners, the association undertakes research into the CO2 absorption qualities of lime, thus demonstrating its commitment to sustainable innovation in the field of construction materials.

A committed participant of the European Heritage Days, Hornos de la Cal de Morón Cultural Association further envisions and works towards the creation of a European network of towns traditionally producing lime, as lime is part of the European identity and especially relevant in the countries of the Mediterranean Sea. Such a network would reinforce the intercultural bonds among rural territories, increase employment by recovering traditional trades and promote the sustainable use of indigenous natural resources.