At the core of the inspiring Morus Londinium project is an interactive online map on which, from 2016 to 2017, the public charted over 700 of the capital’s rare mulberry trees with photos and their associated heritage stories, since the long-lived trees often still stand in the grounds of built heritage sites that have long since disappeared. Thanks to Morus Londinium, funded by a UK Heritage Lottery Fund (HLF) grant to the Conservation Foundation, veteran trees of London are now perceived as living cultural objects, offering the public the ability to “read” the cultural heritage of a city like London through an entirely new lens – its old trees.

Although mulberry trees were introduced to Britain by the Romans in the 1st century AD, England has a legacy of ancient mulberries from a failed attempt of King James I in the 17th century to start an English silk industry that could rival successful ventures in France, Italy and Spain; a historical connection that led to Morus Londinium’s expert contribution to the UNESCO Silk Roads Online Platform. In the 18th and 19th centuries, mulberry trees continued to be planted for their ornamental value, their delicious fruit and their associations with childhood and innocence.

Morus Londinium revived these long-forgotten heritage buildings and historical communities, nowadays commemorated only with street names of little meaning to local residents. In addition to walks, talks and events, community engagement was stimulated by the distribution of 100 mulberry saplings to schools and its association with Roots and Shoots, which provides vocational training to young people from London’s inner city. 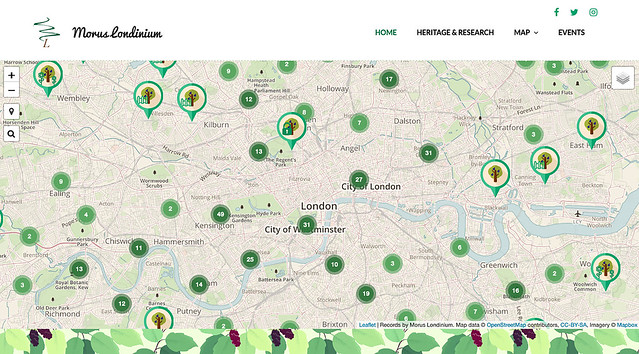 The Jury praised the project’s achievements: “The crowd sourced project included digital engagement to not only map and preserve trees in an interesting and advanced way, but also to teach participants that trees each have stories and connections to their local surroundings. There was a good educational impact in a number of schools, where the interest of students was stimulated in silk and silk-making, in turn helping to preserve these traditional activities.”

Morus Londinium further raised awareness of the enormous contribution made by trees to urban living in terms of personal wellbeing, but also as generators of oxygen and organs for storing CO2, while reducing the heat island effect of the built environment. By linking conservation and awareness of the natural heritage with built and intangible heritage, the project has become a pioneer in bringing heritage issues, the environment, biodiversity and sustainable urban living into the same forum of public and political debate.

“Morus Londinium represents an innovative way of learning, teaching and researching the history of a place, promoting well-being in an urban context and creating a sustainable way to preserve nature, thus fitting the goals of the 2030 EU Agenda for Sustainable Development. This methodology can easily be applied to other places, achieving these goals also elsewhere. The idea behind the project encourages us to see ourselves within nature and to change our priorities and perception of time, in contrast to the speed of contemporary life, especially in cities,” the Jury noted.