The restoration of parts of an 1838 paper mill, reconstruction of other parts and modern extensions, to create a human scaled shopping centre. The building complex was listed in 1959 but was burned in 1984, leaving only the brick walls remaining. 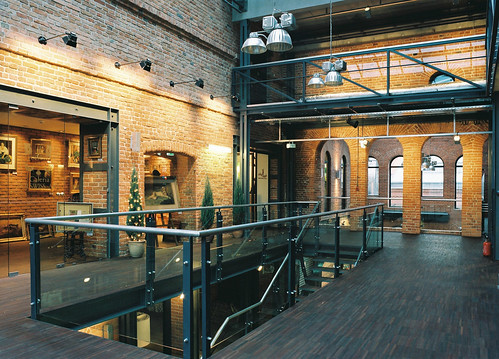 Rather than recreating the old historical building, the more important task was tackled of retaining the spirit of the place and returning it to its central, forgotten role as an important urban element of the neighbourhood, now with new commercial and cultural functions. The preserved brick structure is exposed and is complemented by modern steel elements and detailing, which give the whole the feel of the industrial heritage. The lighting was carefully designed to create an inviting, elegant impression, while the contrast between old and new creates a harmonious contrast.

“For the exemplary and dynamic rehabilitation of an industrial heritage ruin, and its conversion into a centre for commerce and culture, now at the heart of its community.”