Home Winner Oratory of the Partal Palace in The Alhambra, Spain

Oratory of the Partal Palace in The Alhambra, Spain

The Oratory of the Partal Palace embodies the Islamic roots of the Alhambra, the famous fortified palace complex that overlooks the city of Granada in Andalusia. The 14th-century Oratory and the adjacent House of Astasio de Bracamonte emphasise the Arab influence on architecture in the southern Iberian Peninsula and highlight the region’s history of Islamic rule. The architecture is richly ornamented, with arabesque plasterwork and an intricately decorated timber frame and wooden ceilings The World Monuments Fund and Robert W. Wilson Challenge co-financed the restoration work, in partnership with the public institution of the Council of the Alhambra and Generalife, which forms part of the Cultural Department of the Regional Government of Andalusia.

As part of its general programme of conservation, the Council of the Alhambra and Generalife developed several preliminary studies on earlier historical restorations and on the conservation needs for the structure. The outcomes of these studies led to a three pronged restoration project by the Council of the Alhambra. The first phase included the restoration of the timber frame and the decorated ceiling of the entrance and corridor, followed by the structural repair of the roofs. Finally, the original decorative elements of the Nasrid dynasty and the plasterwork on the inner walls of the Oratory were restored and the external and partition walls were consolidated.

A careful differentiation was made between the original elements, the historical restorations and the new interventions. This enables a careful reading of the different historical constructive periods while maintaining the homogeneous aspect of the monument. 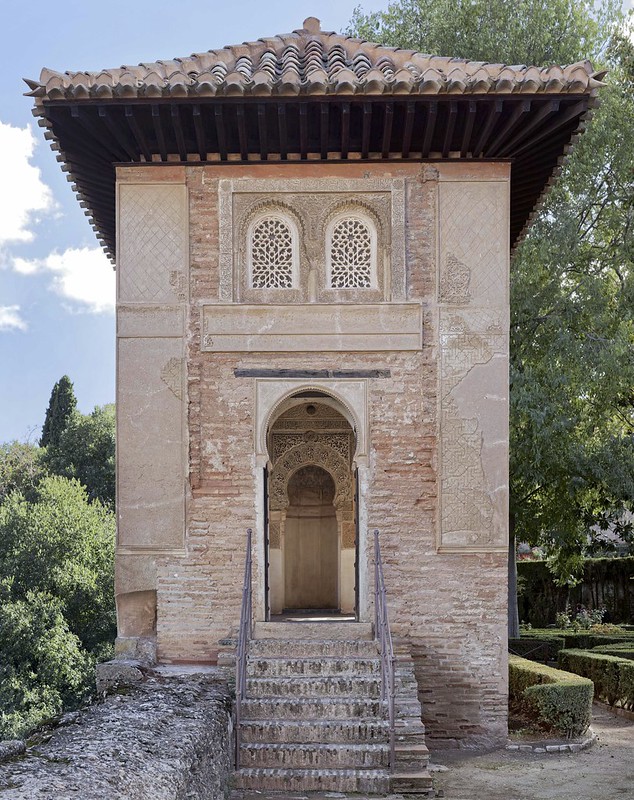 The project has revealed previously unknown 14th-century inscriptions, decorative elements and technical solutions that were not known to have been employed in the Alhambra before this restoration. Therefore, this intervention has enriched what is known of the building construction techniques of the 14th-Century hispano-muslim carpenters and master masons of the Alhambra palaces, and on the subsequent historical repairs and restorations of this important heritage building. These details are of great value to the understanding of the whole Alhambra complex. The restoration project was completed in June 2017.

“An important part of European, cross-cultural history is represented at this site. Its restoration, an excellent example of public-private heritage partnership, is based on thorough interdisciplinary, scientific research and has revealed further details about Nasrid construction and carpentry technology. It showcases the richness and diversity of the materials used and is respectful of the previous interventions on the building,” the jury noted.