This townhouse was built by Bernardino Cantone in 1563 for Nicolosio Lomellino, yet the palazzo became to be in a poor state of conservation. Following conservation, the ground floor and first floor are now open to the public, displaying one of the most superb manifestations of Genoa’s history. 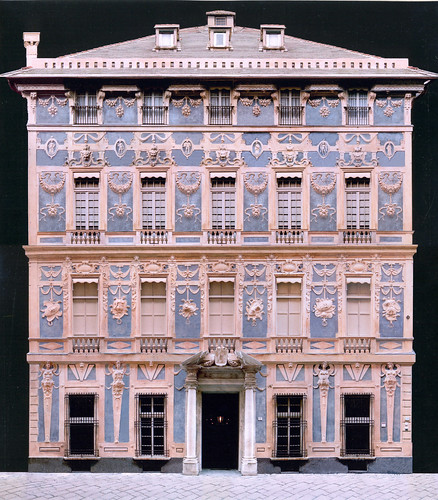 The facades and the great hall have been restored to unveil the original slate-grey and ochre colour scheme and the sixteenth-century ornate stucco. The degraded ninfeo in the courtyard was also restored. In the oval atrium, the white bassorilievo medallions, cornices and figures in full relief against a sky-blue background were restored to their original colour. The discovery of frescoes under a false ceiling – long believed to have been lost – was a remarkable finding. The 18th century garden was returned to its former glory.

“For the careful restoration of the elaborate plasterwork, stucco and frescoes of an important 16th century Mannerist palazzo.”