Paleochristian mosaics of the Basilica complex

The World Heritage site in Aquileia includes the archaeological areas and the monumental Patriarchal Basilica, symbol of the city, completed in 1031. This Basilica itself constituted a radical restoration of the ancient religious complex, including the floor mosaic depicting scenes from the Old Testament, commissioned by Bishop Theodorus between AD 313 and 320. The mosaic was not rediscovered until the beginning of the 1900s, when the floor coverings of later centuries was removed.

This project has sought to conserve the mosaics in the southern hall joined to the Baptistery, built at the end of IV or the beginning of V century AD, in such a way that they can be accessible to visitors but also protected against future deterioration. The approach and style are carefully attuned to the surroundings, but definitely contemporary: externally the covering structure appears to comprise traditional materials, but internally powder-coated iron has been used to distort the space so that the visitor’s focus on the mosaics alone. Moreover the conservation of the mosaics themselves has been carried out with state of the art professionalism by leading experts. 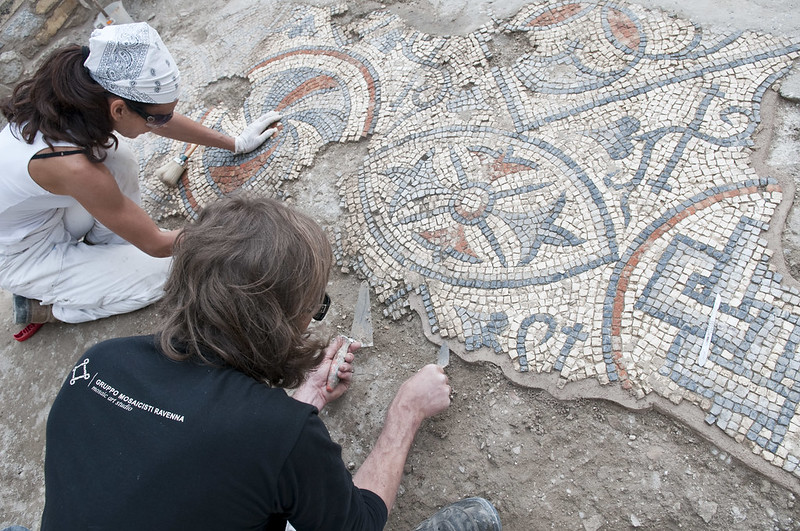 The Jury were impressed with the way the frequently-encountered problem of combining protection with adequate display (of archaeological structures in the open air) has here been resolved. It has been achieved with the construction of a new and very simple building, rectangular in form, built utilising the stones scattered over the site, and offering to visitors the appearance of a continuous wall. The only linear window faces the Basilica in the narrow road between, thus allowing a glimpse of the interior. The intervention could be considered an exemplar of great significance for a problem that, until now, has been tackled in many different ways, and with varying success, all over Europe.