The Foundation for Cultural Heritage of Castille and Leon has undertaken the restoration of various fragments of art that were discovered during the disassembly of the choir in the church of St Nicholas of Bari in Madrigal de las Altas Torres. Beneath the overall uniform appearance of the assembly was found: a choir on two levels with stalls of two distinct types, the backs pf which were decorated with polychrome, gilt medallions, carved wooden elements, and simply painted coffers; fragments of canopies, columns, and other decorations, originating from an antique altarpiece, which crowned the choir stalls and were crammed into the grille that enclosed the choir. 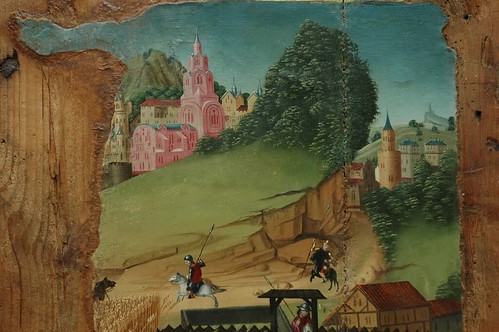 All of these elements had been united into a collage that maximised the utility of each piece, whether functional or decorative, within the ensemble. The initial stage of the restoration intervention involved the identification, inventory, and study of the following elements: the principal choir stalls and their Mudejar gothic ceiling, other Baroque choir stalls, parts of a Late Mediaeval altarpiece, and elements originating form a Renaissance coffered ceiling. Ultimately, the Foundation for Cultural Heritage of Catille and Leon recovered each of the elements individually and organised them into a coherent ensemble that demonstrates the condition both before and after the restoration of each of these disparate works of art.

“The project is appreciated for the accuracy of the scientific research and the sensitive restoration of the different constructive and decorative elements of the choir.”