Home Winner The Pavilion of Prince Miloš at the Bukovička Spa

The Pavilion of Prince Miloš at the Bukovička Spa

Built in 1907, the Pavilion of Prince Miloš is located at the site of one of the oldest mineral water sources in Serbia and was the first bottling plant in the country. Several buildings in the Bukovička Spa Park, in which the Pavilion is located, suffered the effects of neglect during the period of unrest in the last century. In May 2014, floods destroyed most of the Park’s buildings. The Ministry of Culture immediately placed the Pavilion on a list of important buildings that needed to be restored. The renovation of the Pavilion ultimately took just nine months and was achieved thanks to the cooperation of the Kingdom of Norway, who financed half of the project through the Norwegian Ministry of Foreign Affairs. The other half was financed by the mineral water company “Knjaz Miloš”, the municipality of Arandjelovac and the “Bukovička Spa” Hospital, who managed the project.

“This project is a good recovery of a monument, which has maintained its original use following a natural disaster. The result has been achieved with a modest budget, setting a good example for other spa towns throughout Europe”, the jury stated.

The Bukovička Spa in Arandjelovac was the favorite destination of Knjaz (Prince) Miloš Obrenović, who was Prince of Serbia until his death in 1860. The Spa is located in one of the oldest and most beautifully preserved spa towns in Serbia. Today, it is an important center for wellness and rehabilitation.

The Pavilion is composed of three parts; the source of the mineral water was in the centre, in the north wing of the building was a bottling factory, while the south wing with the colonnade served as a pastry shop. The bottling factory brought prosperity to the town of Arandjelovac. In the factory, everything was done manually including the washing and filling of the bottles. The water was then distributed all over the country. 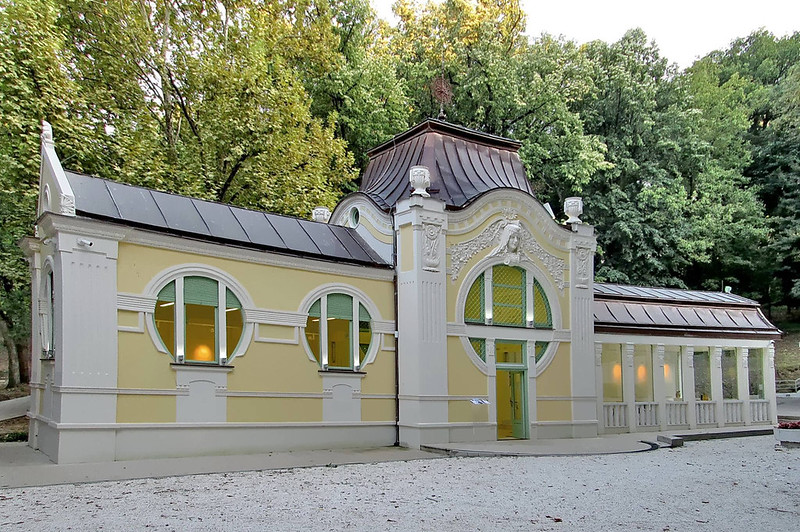 “The spa concept is relevant in a large part of Europe and Art Nouveau was a typical style for these structures”, the jury highlighted.

In the mid-1960s the Pavilion of Prince Miloš was transformed into an art gallery, and today it still houses a gallery, as well as a small museum about the Bukovička Spa. The central part of the Pavilion still offers mineral water which is now sourced from all of the surrounding springs.

The renovation included securing the structural elements of the building as well installing essential protective elements against rain and groundwater. Great attention was paid to restoring the plaster facade of the building, the windows, roller shutters and the main door. The wooden elements and interior decoration were also cleaned and restored, using photos and postcards from the time to ensure authenticity. The jury noted “the appropriate attention to detail in the recuperation of this important site, for example in the recovery of the taps”.

The Pavilion was reopened in June 2016. “The project has had a positive influence on the local community and municipality to continue in the preservation of the spa park as a whole in the near future”, the jury said.​