Home Winner The Picturesque Garden of the Museum Van Buuren

The Picturesque Garden of the Museum Van Buuren

The Picturesque Garden of the Museum van Buuren in Brussels was laid out for the owners by Jules Buyssens (1872-1958), a garden designer who achieved an international reputation. It was created between 1927 and 1928, just before the building of its accompanying villa, an art deco gem in the Dutch style, now a Museum. The second rose garden was completed in 1935. It is the only protected, private garden in Brussels which opens to the public.

Buyssens was one of the main theorists of the distinctive Belgian Picturesque Garden movement of the period. Its main characteristics were, by the creation of different levels and viewpoints, to give in a confined space an evocation of a variety of natural forms: a wild garden, water and bog gardens, a rock garden, a walled garden, a fernery and herbaceous border. His ingenuity in the use of water is illustrated by a stream which trickles around the site. Gradually however, the garden had become overgrown and in places reverted to nature or been altered piecemeal. A large range of experts, in planting, water management, ironwork, stonework, carpentry were required to complete a comprehensive restoration of this exceptional, though disappearing style of garden. 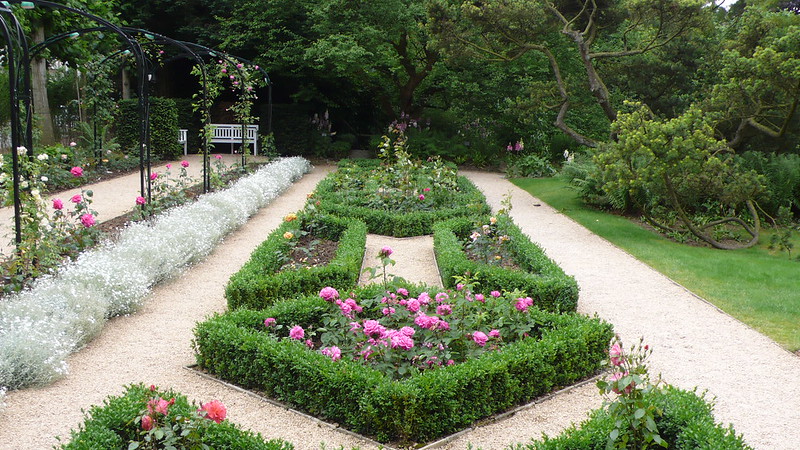 The Jury could appreciate the delight of visitors to the restored garden, with its new planting, renewed vistas, and not least the reconstituted rose garden. It is now possible to grasp the special renaissance of horticulture which ‘flowered’ in Belgium in the period between the wars. Without such restorations, this remarkable phase in garden history would have entirely disappeared. This revival covers not only aesthetics, but also choices of genus and species. For example, lost varieties of roses and other specimens have been rediscovered and cultivated, a precious gift towards horticultural conservation throughout Europe.