In 1978 Margaret Gardiner left her fine collection of 20th century British art to Orkney. It was housed in a former Hudson’s Bay Company warehouse on one of the piers in the harbour of Stromness, but the warehouse was no longer considered adequate to house these works. In this project, these charming premises were conserved and refurbished to provide the necessary controlled environment for the works of art, and they were enhanced by a clearly identifiable new building which harmonises with the surrounding harbour structures, water and piers. The project subsequently received the Andrew Doolan Award for the Best Building in Scotland in 2007. 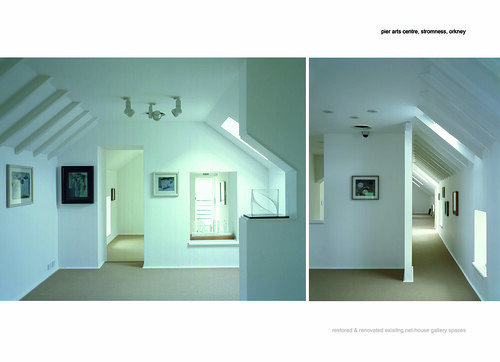 The Pier Arts Centre is a combination of permanent gallery spaces and new temporary galleries. The permanent galleries house a collection of British contemporary art of international status. The new building explores the familiarity of the old, transformed into a form that alludes to its contemporary cultural role.

“The Jury is impressed with the way the Arts Centre with its new architecture not only reflects the remarkable light and atmosphere encountered by anyone travelling to this island fishing village, but also how it accommodates and promotes an art collection of international importance for the benefit and enjoyment of Orcadians and visitors alike.”