Plaka Bridge is a single arched stone-bridge, the largest and most impressive of its kind in Epirus. On 1 February 2015, during a heavy storm that caused the river to overflow, a significant part of the main arch and the east pier of the bridge collapsed. The project has restored the bridge to its former beauty and underlined its considerable value to both the tangible and intangible values of the natural landscape in which it is found. The project was completed thanks to the successful collaboration of the Ministry of Culture and Sports, the Ministry of Infrastructure, the Ministry of Finance, the Prefecture of Epirus, the National Technical University of Athens and the Technical Chamber of Greece. The project was funded by the Hellenic Ministry of Finance and Development. The Region of Epirus and a private sponsor also contributed financially to the project.

The Plaka Bridge was built in 1866 on the river Arachthos with an arch spanning over 40 metres with a height of 20 metres. It is listed as a protected historical monument and has an important historical significance to Greece. The bridge was constructed to establish communication and trade with surrounding communities and, until 1913, it was on the border line between Greece and the Ottoman Empire, serving as one of the two mainland entrances to Greece. Though limited repair works were carried out on the bridge over time, none addressed the serious underwater erosion of its foundations. 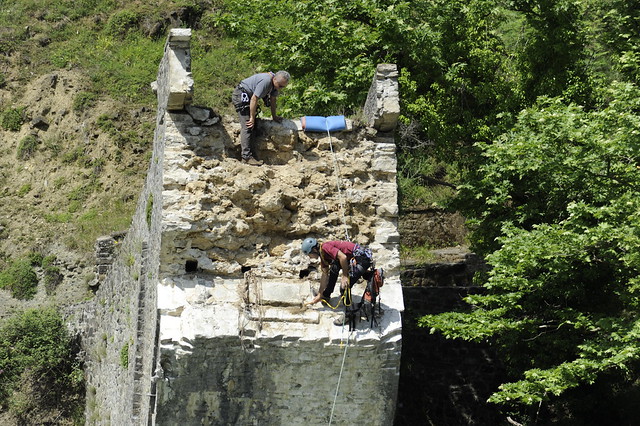 With strong public support, the work to recover the Plaka Bridge began almost immediately following the collapse of the bridge in February 2015. Extensive interdisciplinary research and documentation was carried out to understand the cause of the collapse and to design a comprehensive restoration programme that would stabilise the remaining elements of the bridge, address structural issues posed by river flow and allow reconstruction of the bridge using the original, fallen fragments wherever possible with the careful selection of appropriate, additional materials when necessary. “Research and documentation formed a solid foundation for this project which aimed to define and repeat the traditional techniques that were used in its construction”, the Jury noted.

The project is remarkable in that it is the very first reconstruction of a stone-bridge in Greece, and is one of few similar projects worldwide. The wide range of expertise and knowledge which has been recovered about this unique project has been enriching for the scientific community, with results disseminated through publications and conferences at an international level. Natural, traditional materials were used in its restoration while traditional construction methods were recovered and demonstrated during the project. The restored monument has been reintegrated into its outstanding natural landscape as well as in the social and cultural life of the community.

“This project is an example of how a structure that follows the principle of utility and construction becomes beautiful. The completed restoration of the Plaka Bridge contributes to the enhancement and conservation of the landscape and of the environment”, the Jury stated.