The Rising From Destruction Campaign

The Rising from Destruction Campaign was conceived in 2016 by the Incontro di Civiltà Association as a call to action against the deliberate destruction of cultural heritage, which has become a core feature of modern conflicts. The project involves four awareness-raising exhibitions, an international conference, the restoration and repatriation of two damaged busts from Palmyra and a documentary was produced and broadcast by the Italian television channel Sky Arte.  Raising awareness on the importance of protecting cultural heritage is the central aim of this campaign.

The jury highlighted how “this Campaign has raised awareness of the often ephemeral and fragile nature of heritage elements through a high-quality exhibition which stresses the role of research and technology in reconstructing the heritage assets destroyed by human action”.

The exhibition “Rising from Destruction. Ebla, Nimrud, Palmyra” took place in the Colosseum, Rome from October to December 2016. It is estimated that 300,000 people visited the exhibition, which proposed the 1:1 reconstructions of three monuments destroyed by ISIS: the human-headed bull (Nimrud), the Archive Room (Ebla), the ceiling of Bel’s Temple (Palmyra). Two damaged sculptures recovered in 2015 from Palmyra by the Directorate-General of Antiquities and Museums of Damascus (DGAM) were restored by the Superior Institute for Conservation and returned to Syria in February 2017.

The exhibition, “Ebla. A new culture. A new Language. A new history” took place in April in Brussels  on the occasion of the conference “Supporting the Future of Syria and the Region” chaired by Federica Mogherini, High Representative of the E.U. for Foreign Affairs and Security Policy and Vice-President of the European Commission. 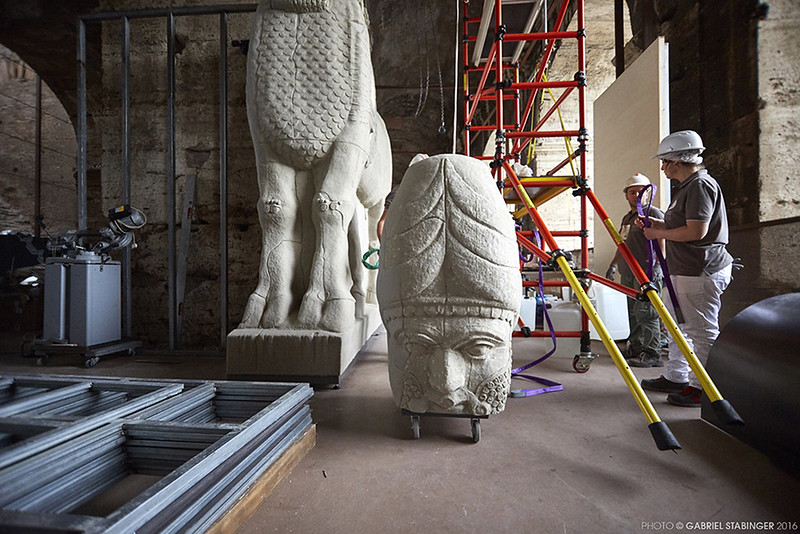 In May, in Rome, the conference “Documenting our Heritage at Risk” brought together: selected heritage professionals and technology experts to share their experiences and solutions for the documentation of heritage in crisis zones. In November to December of the same year, the exhibition “Palmyra: Rising from Destruction” took place during the 30th ICCROM General Assembly. It featured two examples of heritage from Palmyra: the reconstruction of Bel’s Temple and a funeral bust looted from Palmyra which was recovered in Italy by the Carabinieri Command for the Protection of Cultural Heritage.

Most recently, the exhibition “Nimrud. The human-headed bull protecting the King’s Palace”, took place at UNESCO’s headquarters in Paris from November 2017 to January 2018 and was inaugurated by Irina Bokova, former Director-General of UNESCO and Faryad Rawandozi the Iraqi Minister of Culture.

In 2018 the Association will promote, in collaboration with the Italian Government, a second phase of interventions to rebuild monuments and archaeological sites. The Association has proposed an intervention programme to the Ministry of Culture of Iraq consisting of the restoration of two archaeological sites affected by DAESH’s recent destruction as well as the donation of the 1:1 scale reconstruction of the human-headed Bull of Nimrud to the Republic of Iraq. The Association received the support of UNESCO, the European Commission, the Superintendence for the Colosseum and the Roman Forum, the Italian Archaeological Mission in Syria, Mondadori Electa, Sky Arte, the , ICCROM, FAO, the Carabinieri Command for the Protection of Cultural Heritage, the Superior Institute for Conservation and Restoration, the Italian Ministry of Foreign Affairs, the Italian Ministry of Culture and the Fondazione Terzo Pilastro – Italia e Mediterraneo. The initiative received additional funding from the Fouad Alghanim & Sons Group of Companies, the Fondazione Carla Fendi and from an open fundraising Campaign.