RomArchive is an international digital archive for Romani arts – a growing collection of art of all types, complemented by historical documents and scholarly texts. The idea for the archive is based on the extensive research and numerous interviews that the project initiators, Franziska Sauerbrey and Isabel Raabe, conducted with Romani artists, curators, activists, and scholars from all over Europe. The research clearly identified the need for an internationally accessible space that would make Romani cultures and histories visible as well as respond to stereotypes with a counter-history told by Roma themselves. RomArchive’s development, until its launch, was mainly supported by the German Federal Cultural Foundation. Following its launch in January 2019, RomArchive was handed over to the Documentation and Cultural Center of German Sinti and Roma, who will be the long-term host of the archive.

While traditional archives often portray Roma in stereotypical ways, RomArchive focuses on their self-representation, leading to the emergence of new narratives, reflecting the diversity of Romani national and cultural identities. Members of the community are involved in all positions of responsibility – as curators, artists, scholars, and members of the project’s advisory board. The curators determine the contents of the archive and gather collections related to dance, film, literature, music, theatre, the visual arts, and flamenco along with first-person testimonies related to the persecution of Roma under the Nazi regime and scholarly material on the civil rights movement.

“The subject of this research is essential for the history of the people of Europe”, the jury said, “Roma, with twelve million people, constitute the largest neglected minority in Europe. This archive is particularly innovative as it pays attention to the self-representation of Romani identities, expressing both tangible and intangible aspects of this heritage and moving away from the stereotypical perceptions of Roma”. 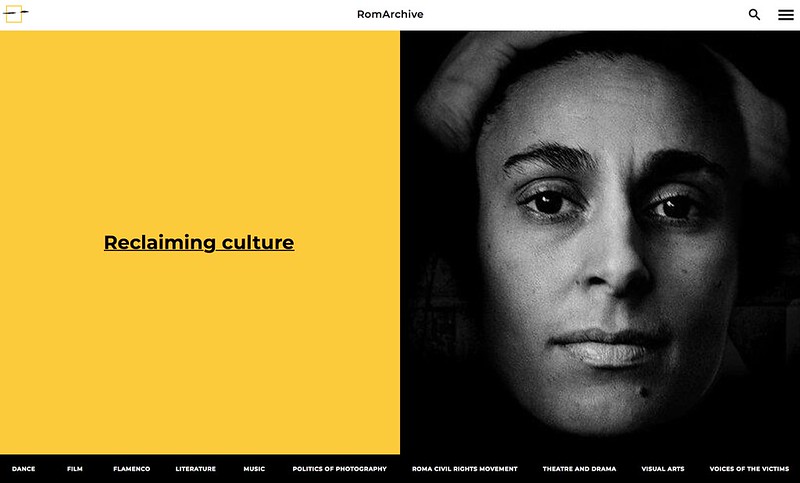 The wealth of Romani artistic and cultural production – tightly interwoven with that of Europe as a whole – is rendered visible and accessible by RomArchive, to the benefit of all Europeans. “European identity is based in its diversity and in sharing a sense of values and of belonging, to which this project contributes,” the jury said.
The archive’s aesthetically appealing magazine-style web interface, with images and stories, will inspire users to delve deeper into the topics presented while background information helps the users to understand the context in which each of the works was created. For international accessibility, the website is already available in English, German, and the Romani language with further languages envisioned in the near future.

“The digital archiving of Romani arts represents a first initiative in knowledge collection and dissemination and already represents 5,000 objects. This multilingual website, available in Romanes, is a constantly growing platform,” the jury noted.