Sewn Signs (“Semne Cusute”) is a project that revolves around the Romanian traditional shirt ie (“cămașa cu altiță”). The project, initiated by Ioana Corduneanu, advocates for awareness and recognition of the heritage value of this traditional shirt, which is a masterpiece of collective design with wisdom encoded in its patterns.

The project also aims to make a statement against the “fast fashion” industry and consumerism while reviving a textile heritage that is at risk, due to poor documentation and being passed on only through oral transmission. By educating, empowering and entrusting people directly as guardians of this fragile heritage, and by translating the meaning of the sewn symbols, the zero-waste cutting patterns and the meaning behind any gesture required in the making of a shirt, Sewn Signs aims to make a place for heritage in people’s own wardrobes, ready to wear at anytime.

In March 2014, Ioana Corduneanu set up the learning community. The foundation of this project was a blog-archive, a free open source resource with over 2,000 patterns, as well as tutorials. Since then, it has amassed more than 42,000 active members and led to the creation of more than 50 satellite communities, both at international and local level. 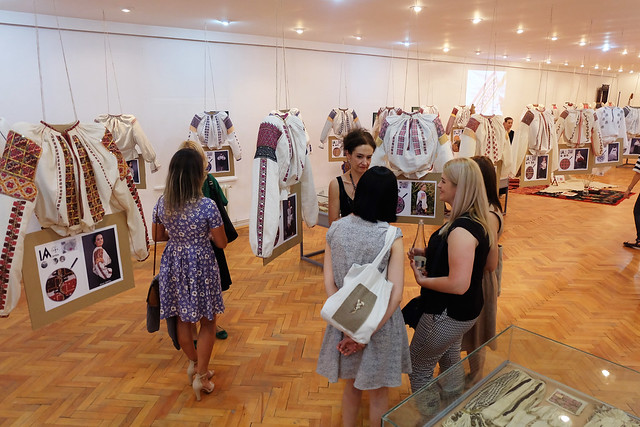 Sewn Signs targeted audiences who knew nothing about traditions and had never held a needle in their hands. Based on a unique communication method, the ancestors who developed the style are presented as designers educated by need, with great-grandmothers presented as fashion icons with their own ethical style. The project has generated a movement that is now having a direct impact on safeguarding and reviving the history of Romanian textiles.

The main goal was to inscribe this traditional art form on the UNESCO Intangible Heritage List, thus ensuring its awareness, recognition and protection, and the dossier was submitted in March 2021.

“Sewn Signs focuses on female-led heritage and is concerned not only with the dissemination of traditions, but also speaks about symbolism and the activities through which women have expressed themselves historically. In addition, it has a strong community ethos and a truly democratic approach to sharing knowledge. The project should also be commended for its strong emphasis on sustainability due to its connections to the slow fashion movement. It sends a good message for Europe on how to become fashion independent, by not only keeping traditions but using them for new ways of development”, concluded the Awards’ Jury.