A restoration of the Piermarini Theatre and the 19th century former Casino Ricordi and removal of later adjunctions allowed a new lease of life for the struggling theatre. From 2002 to 2004, La Scala underwent major rehabilitation works, including the complete overhaul of the technical layout of the stage. 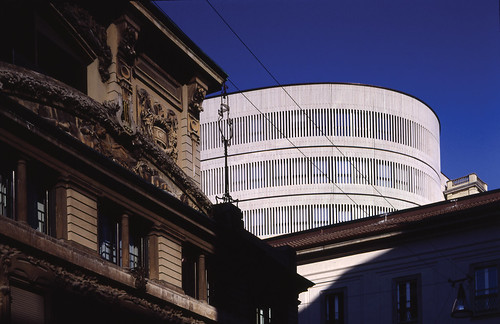 The volume of the stage tower and rehearsal rooms were reconstructed as their proportions and heights were bound by technical requirements, while an axis parallel to that of the Theatre allowed space for canteens and dressing rooms. The new volumes are constructed away from the street façades with the dual objective of emphasizing the relationship of the façades with the urban environment, whilst simultaneously highlighting the different transformations throughout history.

“For a stunning intervention that enables La Scala to retain its functional and symbolic role as one of Europe’s foremost opera houses, and which sets a precedent in Italy for the renewal of the historical urban fabric.”