The Technical Committee on Cultural Heritage (TCCH), established in 2008 by the Greek Cypriot and Turkish Cypriot leaders under the auspices of the United Nations, has uninterruptedly dedicated its time, energy and expertise to the recognition, promotion and protection of the rich and diverse cultural heritage of Cyprus, and by extension, of Europe. Over a period of 12 years, the TCCH has successfully restored and conserved more than 70 monuments of great historical, archaeological, religious and societal importance.

In support of its relentless efforts, the Committee has received funding mainly from the European Union but also from other donors, such as the Church of Cyprus, the EVKAF Administration, the USAID, the Holy See, the A.G. Leventis Foundation and local funding, channelled through the UNDP, which also offers technical assistance and oversees the implementation of the projects.

The Committee is equally composed of representatives of the Turkish Cypriot and Greek Cypriot communities. These representatives have worked tirelessly to centre cultural heritage as a powerful tool for peaceful cooperation and for the creation of a climate of reconciliation. In recognition of the Committee’s achievements in enhancing intercultural dialogue and promoting mutual understanding, co-chairs Mr. Takis Hadjidemetriou and Mr. Ali Tuncay received the 2015 European Citizen’s Prize. 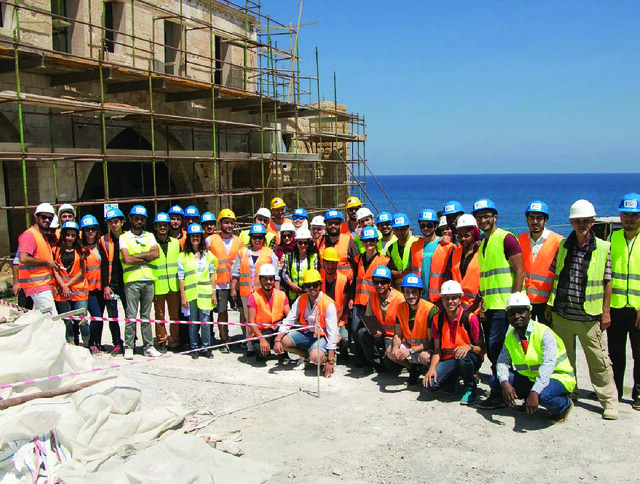 “This unique model of collaboration between two communities, in spite of a challenging political context, is an important example of dedication to conserving heritage. The ceaseless and peace-promoting activities of the Committee, composed of volunteer experts from the Greek Cypriot and Turkish Cypriot communities, demonstrate their courage and their hope,” the Jury stated.

Cyprus’ diverse heritage reflects the many civilizations that have left their mark on the island: from the Greeks, the Phoenicians, the Romans and the Byzantines to the Lusignans, the Venetians, the Ottomans and the British. The TCCH regards the spectacular monuments these civilizations left behind as common heritage which belongs to all Cypriots and to all Europeans.

Among the many monuments and sites that the Committee has restored are the famous monastery of Apostolos Andreas in the Northern part of Cyprus, the Othello Tower and the city walls of Famagusta, first built by the Lusignans in the 12th century and throughout the ages modified and improved by the Genoese, Venetians, Ottomans and the British. These sites, each a tangible marker of Cyprus’ long and rich heritage, are now preserved for future generations thanks to the unflinching dedication of the Technical Committee on Cultural Heritage.

The education of younger generations of Cypriots has been central to the mission of the Committee. An interactive educational programme, including site-visits of ongoing conservation work, gives young people the opportunity to share in the knowledge and experience of restoration experts. More than 2,000 participants have taken part in guided tours to ongoing projects or attended presentations organised by Committee members.

The Jury highly praised the TCCH’s achievements: “The work of the Technical Committee on Cultural Heritage is a powerful demonstration that people of different cultures, languages and religions can and should try to overcome their differences and work together for the common good. This is undeniable proof that cultural heritage is the glue that unites people, both among local communities and across borders.”