Dating from around 1375, this is one of the last surviving examples of a series of medieval barns whose construction technique was specifically adapted to the maritime climate of north-western Europe. Its early listing in 1938 had prohibited the erection of modern infrastructure, thereby ensuring the preservation of the building in a virtually intact state. Nevertheless, despite exemplary maintenance by the local farmer over time, restoration had become unavoidable. 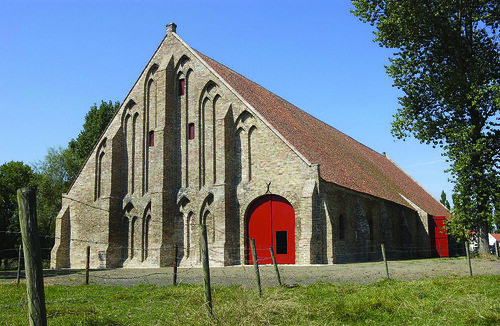 The timber framework inside the barn was eroded by centuries of exposure to air, light, water infiltrations and wood-consuming insects. The authenticity of the structure, its age, its preservation and the immense historical interest of the construction and assembling procedures, demanded maximal preservation of the original fabric and the sole use of traditional techniques in its restoration. Each of the 3,200 timber elements constituting the framework was inventoried and its state of conservation assessed. Degraded elements were replaced by green timber of the same essence as the existing fabric, rather than by synthetic prostheses. Restoration of the masonry involved the partial substitution of the individual bricks, reparation of cracks, reconstruction of some badly eroded buttresses, and re-pointing of joints with pure lime mortar. Finally, some 32,500 roof-tiles were removed and reinstated following restoration, and worn tiles were replaced by identical tiles. This successful restoration clearly demonstrates the relevance and affordability of the craftsman’s approach to the ancient timber frame in the 21st century.

“For the meticulous restoration of the complex timber framework of a rare 14th century monumental Cistercian barn through the application of traditional techniques. This successful restoration clearly demonstrates the relevance and affordability of the craftsman’s approach to the ancient timber frame in the 21st century.”