Located on one of the capital’s busiest thoroughfares, the sprawling Urania was constructed as a cabaret and concert hall by the German-born architect Henrik Schmahl in 1896. Characterised by its striking Venetian Gothic and Oriental façade and an opulent interior décor reminiscent of the Arabian Nights, this registered national monument ran into financial difficulties and closed in 1999 due to competition from suburban multiplex cinemas. 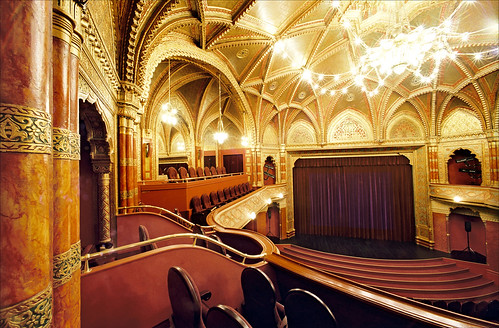 The rehabilitation of this eclectic building into the National Film Theatre involved preserving the richly decorated interior, correcting the dysfunctional characteristics originating from subsequent reconstructions and streamlining the theatre with the installation of modern technology, ventilation and plumbing systems. Two new viewing rooms of 60 seats each under the present auditorium in the cellar were also installed and comfortable conditions were created by reducing the seating capacity from 650 to 360.

“For the exemplary rehabilitation of a superb theatre in the Hungarian Eclectic style and the harmonious integration of modern spaces with state-of-the-art technology into the original layout.”