The Vardzia Rock-Cut Complex is one of the most important examples of medieval heritage in Georgia. Due to its location in the most active seismic region of Georgia, the rock-cut architecture has suffered serious decline. This project, to ensure the stability of the complex, was funded by the Government of Georgia and the Cartu Foundation. The National Agency for Cultural Heritage Preservation of Georgia acted as managers of the project in close collaboration with ISPRA (Geological Survey of Italy).

The creation of this fascinating complex was initiated in the second half of the 12th century by King George III and was completed by his daughter, Queen Tamar. It is located along a cliff, stretching to a height of 50 metres and a length of approximately 800 metres and consists of several hundred rooms. The wall paintings in the church dedicated to the Assumption of the Virgin, dating to the 12th century, are some of the best preserved and most important examples of their kind. The complex has been listed on the World Heritage Tentative List since 1993.

For centuries, the natural processes of rock erosion, combined with seismic tremors have threatened the integrity of the site. With a drastic increase in visitor numbers in recent years, there was an urgent need for increased safety measures. 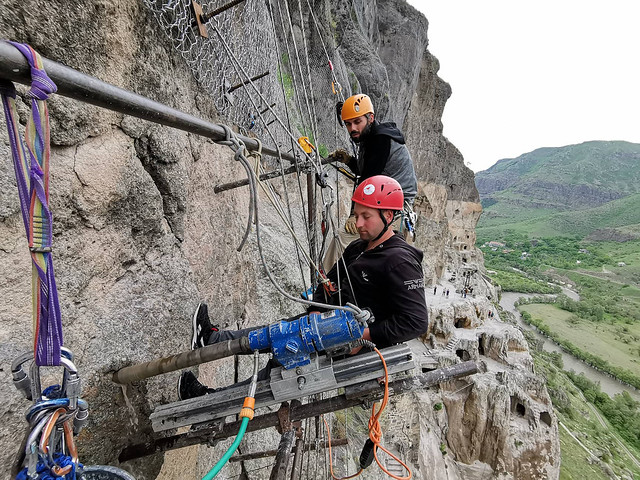 Due to the complex nature of the site, an approach based on interdisciplinary earth sciences and advanced, non-intrusive technologies was needed. To boost the knowledge and capacity of local professionals and researchers, experts from ISPRA were invited for methodological assistance by the National Agency for Cultural Heritage Preservation of Georgia resulting in a comprehensive conservation plan. From 2015 to 2019, a number of urgent measures and the development of a long-term strategy to mitigate rockfalls and landslides in Vardzia were undertaken. A complex monitoring system was then developed and installed, which gathers key environmental data that is automatically processed and then analysed by the scientific team. This monitoring system will help mitigate future damage and ensure the long-term structural stability of Vardzia.

The capacity-building and interdisciplinary, international knowledge exchange is credited with solving the unique problems affecting this site, an aspect much praised by the Jury who stated: “The collaboration with experts from Italy has ensured the exchange of knowledge and skills as well as the creation of local expertise in this field.”

This successful pilot project has now formed the basis of the “Rock Cut Heritage Safeguard State Programme” which will help in saving several similar sites in Georgia, such as the David Gareji Monasteries and Hermitage which was included on the 7 Most Endangered list 2018 by Europa Nostra and the European Investment Bank Institute.

“This unusual site faces problems which are not yet broadly researched or understood. This project represents an effort to introduce urgent measures to resolve urgent problems, employing a technology not typically used in heritage conservation. The monitoring also presents a low impact process with low environmental effects on this rare, preserved example of a cave excavated town. The project enlarges the concept of restoration and objects of restoration to include the preventive conservation of a vast site”, the Jury said.