Villa E-1027 was designed in the 1920s by the Irish architect and furniture designer Eileen Gray with, and for, Jean Badovici, a Romanian architect trained in France. The villa is found in an isolated seaside location in Roquebrune-Cap-Martin on the French Riviera. Upon its publication in Badovici’s architectural journal, the villa, including more than 180 pieces of furniture designed by Gray, was soon regarded as a groundbreaking manifestation of the Modern Movement. After decades of environmental stress and ill-maintenance, the non-profit Association Cap Moderne restored the villa and transformed it into a museum dedicated to Eileen Gray’s design. The project was funded by the Direction of Cultural Affairs of the Region Provence-Alpes-Côte d’Azur of the French Ministry of Culture, the Conservatoire du Littoral and the Getty Foundation USA, in addition to other private institutions, foundations, enterprises and private individuals.

In the 1930s, the Swiss-French architect Le Corbusier, a pioneer of the Modern Movement, stayed at Villa E-1027 and created seven murals. He later added a wooden cabin and five holiday studios to the location, which are now listed as UNESCO World Heritage. In Villa E-1027’s design, however, Gray went much further than Le Corbusier, by proposing a combination of well-being and intimacy through the language of modern architecture while exposing the limits of functionalism. Turning the Cap Moderne site into a museum for Modernist Architecture greatly contributes to the educational and cultural value of the region. 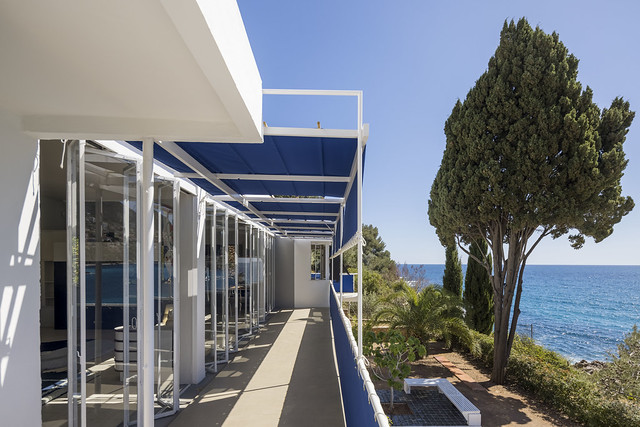 One of the restoration’s major challenges was the effect of the coastal environment on the villa’s defining material: reinforced concrete. Its constant exposure to sea air, rain and water runoff from the coastal slope deteriorated the concrete significantly. Supported by the Getty Foundation, Villa E-1027 served as a pilot for preserving concrete buildings with the use of impressed current cathodic protection (ICCP), a process that runs a regulated flow of low-power electrical current through the reinforced concrete, preventing corrosion. Damaged or missing furniture, furnishings and fittings were reconstructed by craftsmen from six different countries, who manually recreated industrial materials that are no longer available, such as diamond-pointed glass.

“Villa E-1027 is an iconic building of Modernist Architecture. Its complete restoration, down to all interior objects and materials, including advanced systems to avoid corrosion, is exemplary for the future preservation of Modernist Architecture, a type of architecture that is too often pushed for demolition. Its laudable restoration rightfully pays homage to Eileen Gray, an important Modernist architect and furniture designer,” noted the Awards’ Jury.