Home Winner Windmills of the Monastery of St. John the Theologian

Windmills of the Monastery of St. John the Theologian

“Who could resist a sense of exhilaration at the sight of these windmills, in a row, on top of the island, fully restored and spinning against the sky? The jury was asked to consider several different mills from across Europe for this year’s awards and comparisons were therefore inevitable. Among the windmills, the Jury agreed that this group in Patmos was outstanding in the detail and completeness of its restoration, and in the imaginative uses to which each mill was to be put for future production or education. As a group, the three form an integral part of the island landscape’s aesthetic, as well as contributing to its economy as an important and original example of proto-industrial heritage.”

The Monastery’s three windmills sit atop a hill in the UNESCO world heritage town of Chora on Patmos, one of Europe’s most important historical and religious pilgrimage sites. Two of the windmills were built in 1588, the third in 1863. When flour production ceased in the 1950s, the windmills were abandoned and fell into disrepair, as did most of the windmills in Europe. This project aimed at restoring the windmills to their original appearance and design, making them productive by reinstating their traditional use and adapting them to new uses. It sought to open the windmills to the public as a living museum, thereby recapturing and applying lost knowledge that would delight and educate both islanders and visitors alike. The project has resulted in a revitalised, working and aesthetically beautiful heritage site. 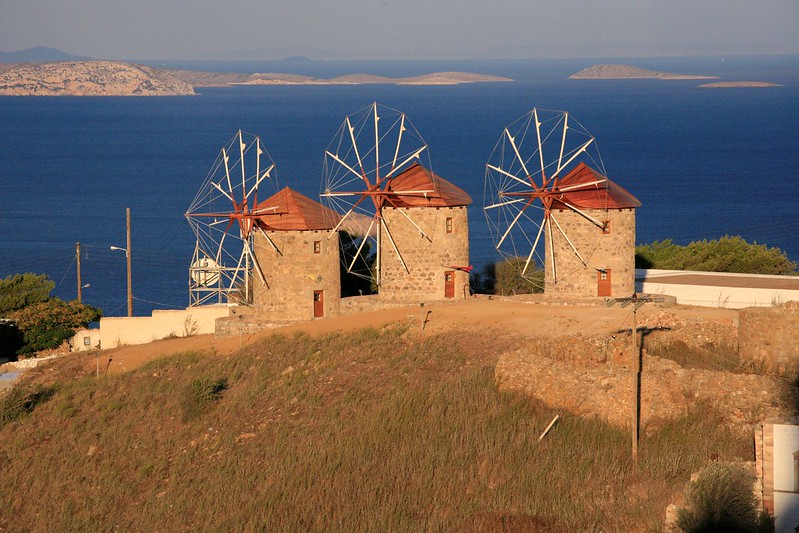